Drake has released the second single for his upcoming album Scorpion. Titled “I’m Upset”, the song sees the Canadian emcee continue in the aggressive vein of his recent output. Check it out below.

Drake announced the song’s release on his Instagram, where he wrote “Anyways…back to this album…new single out now!!!” This is likely referring to “Duppy Freestyle” a diss track against Kanye West and West’s longtime collaborator Pusha-T that the Canadian rapper put out on Friday afternoon.

The diss track was seen by many as a response to Pusha’s own diss track, “Infrared“, released the day before, and sees Drake chide Pusha for using the popularity of Drake’s name to promote his album. “Don’t push me when I’m in album mode,” he raps, “You’re not even top five as far as your label talent goes/You send shots, well, I got to challenge those.”

He also included the line “Tell ‘Ye, “We got a invoice comin’ to you/Considerin’ that we just sold another 20 for you”, implying that the attention that Drake has given Pusha will help boost the sales of his album DAYTONA by 20,000 units. Listen to “Duppy Freestyle” below.

Pusha responded on Twitter, daring Drake to “send” the invoice, and the rapper did just that, posting a faux invoice on his Instagram. The invoice reads “RE: promotional assistance and career reviving” and concludes with a sarcastic “Thank you for business.”

That said, Drake saved the biggest jabs for his former mentor West. “What do you really think of the n***a that’s making your beats/I’ve done things for him I thought that he never would need/Father had to stretch his hands out and get it from me.” This is referencing the complaint that Drake uses ghostwriters on his songs, and reports that Drake actually helped write several West songs for his 2016 album The Life of Pablo.

In an interview with DJ Semtex in 2017, Drake discussed the fickle relationship he’s had with West, including a rumored collaboration album that was eventually scrapped. “I think everybody has their own little things going on” he said, “I’m not really sure what he’s referring to half the time, because in the same breath, I went from being … like working on a project with him, to him sorta publicly s**ting on me and DJ Khaled for being on the radio too much.” Their last collaboration to date was the song “Glow”, off of Drake’s playlist More Life.

The hard-hitting sound of “Duppy Freestyle” and “I’m Upset” has been anticipated and teased by those who are working alongside Drake. Preme, formerly known as the rapper P. Reign, posted a caption on his Instagram story last month that read: “And just know. That Scorpion album. Holy F*%#” followed by five fire emojis.

“Y’all should never have pissed champagne off” he added, alluding to Drake’s nickname as the Champagne Papi. Read his full comments here.

It's bout to get heated my guy lol wait till the album pic.twitter.com/UnXPT65Mr7

Jazzfeezy, a veteran producer who worked on Drake’s 2017 song “Can’t Have Everything“, teased a similar musical direction on Twitter. TV personality Kid Metro tweeted a photo pertaining to Drake’s ongoing fued with Pusha-T, and Jazzfeezy responded by tweeting “It’s bout to get heated my guy lol wait till the album.”

He included a gif of the character Scorpion from Mortal Kombat, playing off the title of the upcoming album and the fact that Drake has more lyrical toughness in store for the listener. Check out the original exchange above. 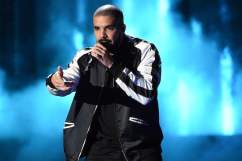