France set up a potentially classic World Cup quarterfinal with Germany (although Algeria will have something to say about that) on Friday after a 2-0 victory over Nigeria. The game, played in the sunshine of the Estadio Nacional, was an end-to-end war.

The Nigerians couldn’t capitalize on early pressure they generated, and their failure to score cost them. As the game went on, France began to dominate. Moments before Paul Pogba gave Les Bleus the lead, Yohan Cabaye hit the cross bar and Karim Benzema pulled an amazing save from Enyeama in the Nigerian goal.

It’s sad to see Nigeria go home, but anybody who says they wouldn’t want to see France vs. Germany in the quarterfinals a liar.

Here’s how it went down in the Brazilian capital:

An Own Goal Made it 2-0 in Injury Time

Everton legend Joseph Yobo appeared to score an own goal after Antoine Griezmann deflected the ball off him following a right wing cross from the always troublesome Valbuena. Game and World Cup over for Nigeria.

How cruel this game is? Just seconds after an outstanding save, Vincent Enyeama was finally beaten by a Paul Pogba header after 79 minutes. The ball went out for a corner after Enyeama brilliantly tipped a Benzema header over the bar. The goalie then made an error by coming for the corner leaving the goal wide open, allowing Pogba to head into an empty net. The Juventus midfielder had to get revenge for this:

Cabaye Hit the Bar Late On

The PSG midfielder hit the cross bar after Benzema hit the ball across the box from the right-hand side. The ball was cleared and sat up nicely for Cabaye, who volleyed it against the yard from 25 yards out.

Victor Moses Kept Nigeria in it

Karim Benzema appeared to have given France the lead as he bounced the ball over Nigerian keeper Enyeama. It looked like it was in before Victor Moses appeared from nowhere to whack it over the line. Benzema had pulled away from his marker brilliantly to get in one-on-one with the keeper on the right side of the box.

It Was Scoreless at the Half

GIF – France vs Nigeria Here's an elbow and a slap just because #WorldCup http://t.co/F9zirYhLAU

Olivier Giroud probably should have been sent off for his elbow and slap on John Obi Mikel on 29 minutes. Other than that, the half was interesting in that France tried to counter-attack Nigeria, a move unusual for such a heavy favorite.

Patrice Evra was also lucky to not give away a penalty after he had his busy hands all over Peter Odemwingie during a corner. The Manchester United player was lectured by the ref, but no foul or penalty was given. What was Mark Geiger talking to Evra about then if there was no foul?

Musa Had a Goal Called for Offside

Ahmed Musa stole in slide home the ball but after a second of panic, the French defenders were relieved to see it had been called for offside. Musa was attacking an Emmanuel Emenike inswinging cross from the left, the French defense stood still, it was a clear offside. Nigeria coach Stephen Keshi must be delighted with his team’s start, although France has broken through a few times and created a few chances, the Super Eagles are competing all the way.

Fans – many of them French – watching France Nigeria on the big screen on copacabana #bbcworldcup pic.twitter.com/jX5sCAudDS

Here’s how both sides lined up to start the game: 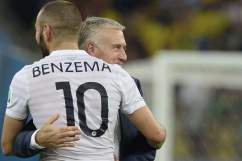 France vs. Nigeria Odds: 5 Fast Facts You Need to Know