Everybody knows what a German enthusiast David Hasselhoff is, so it’s not really surprising that the Baywatch star is rooting for Germany in a big way for the World Cup final. His Germany team play Argentina in Rio for the world’s most famous soccer trophy at 3:00 p.m. Eastern time.

For his hype-video, the Hoff has taken inspiration from Beats headphones successful pre-World Cup campaign that featured Neymar, LeBron James and Luis Suarez.

This version shows the Hoff getting a pep-talk from his daughter while driving around in the Knight Rider car, Kit. 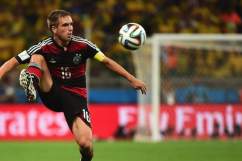