David Luiz recently scored a goal for Brazil in the game against Colombia that is widely considered as one of the best goals in the World Cup thus far.

Paris Saint-Germain just paid $68 million for him to join the team, a record for a defender.

1. He Transferred to Paris Saint-Germain for a Record-Breaking Fee of $68 Million

Luiz began his career at 14 when he joined the Victoria soccer club, and just a year after he made his debut for the tema, he switched to Benfica, where he stayed for five years. After Benfica, Luiz played for Chelsea, where he signed a 5-year contract but only played 3 1/2 years.

After 3 and a half years on Chelsea Luiz was dropped by the team, so he made the transfer to a French club called Paris Saint-Germain for a fee of $68 million. This is a very high transfer fee for any player, and Sky Sports it was the most ever for a defenseman.

Luiz singed a five-year contract with PSG. Although he was sad to be leaving a team who he had been with for years, he was excited for the move. He told Sky Sports:

It’s a big club with a great history, a new step in my life, and I’m impatient to play and show what I can do.

2. He is a Very Religious Christian

Luiz is one of a few players who are very vocal about their religious beliefs, and religion often plays a huge role in his game. Luiz told the Independent that his faith pushes him to strive to be better and he believes that his God-given purpose is to play soccer.

In 2013, when Luiz was dropped by Jose Mourinho at Chelsea, he didn’t lash out at the coach, at the team, or on any media, instead, he turned to God. He told The Telegraph he figured that because God had a plan for him, this must have been a part of the plan.

Luiz reported that soccer legend Kaka is one of his role models because of his dedication to his faith, even on the soccer field. Kaka is an Evangelical Christian who openly prays on the field and credits God for the good things that happen in his life. The two players have both worn shirts with religious messages on them during games.

3. His Hair Helps His Game

Goal.com said that Gatorade Sports Science Institute conducted a study that shows that Luiz’s trademark hairstyle may actually be a huge advantage to him in the game. The test showed that bald athletes are more susceptible to heat stress.

If they are running up and down a field in the heat, a player with less hair is more likely to get tired and worn out. Luiz’s famous curly locks would be beneficial in that case. The more hair, the more protected he is from the heat.

Many of Luiz’s teammates think his hair is weird, but he likes it so he keeps it. Fans are also in favor of Luiz keeping his hair. At many games you see children wearing wigs to look like him.

4. He is Engaged to Sara Madeira

Luiz is engaged to longtime girlfriend Sara Madeira. The couple met when Luiz was playing for Benfica, she is a portuguese native herself. Madeira, 23, and Luiz, 26, met as teenagers and have been together ever since.

Madeira goes to all of the games she can to support him. But she’s also busy working toward becoming a dentist. According to FabWags.com, she has always wanted to be involved in health.

5. Luiz Scored a Key Goal in Brazil’s Win Over Colombia

In the July 4 quarterfinal game between Brazil and Colombia, Luiz scored an impressive goal that effectively sealed Brazil’s spot in the semifinals. The Brazilians were up 1-0 when Luiz had a free kick in the 69th minute that floated over everyone’s heads and fell into the right corner of the goal, putting Brazil up 2-0. This goal was his second in five games. 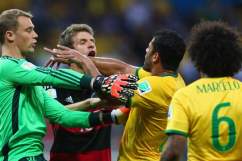 Read More
Soccer, Sports, World Cup
David Luiz transferred to Paris Saint-Germain for the largest fee in soccer history for a defender. He scored a goal that sealed Brazil's win over Colombia.