LeBron James’ biggest fan is his mother, Gloria James and it is pretty well known that LeBron would do just about anything for the lady that single-handedly raised and molded him into the superstar he is today.

Lebron’s father Anthony McClelland left Gloria when he found out she was pregnant. The two had been casual sex partners prior to the news. Gloria lived with her mother throughout her pregnancy and after Lebron was born until her mother died when Lebron was three.

When LeBron’s grandmother died of a heart attack, Gloria was left all alone to raise him herself at the age of 19. Her mother had a large house and when Gloria was unable to pay for it, she was forced to move from place to place.

His mother hadn’t graduated high school, let alone college. With no skills and little to no education, Gloria struggled to keep her and her son afloat. She took any job she could get to get them through and gave LeBron as much love and support as she could.

LeBron wrote in a tribute to his mother:

She put me first. I knew that no matter what happened, nothing and nobody was more important to her than I was. I went without a lot of things, but never for one second did I feel unimportant or unloved.

Gloria and LeBron ended up moving 12 times in three years.

3. She Sent Him to Live With His Football Coach When He Was 9

After moving around so much, Gloria had to make one of the hardest decisions of her life. When LeBron turned 9, she decided that he needed a stable home similar to the one she had growing up. It was LeBron’s pee wee football coach “Big Frankie” Walker that took him in for Gloria while she built up some security in their lives so she could eventually support him herself.

It was hard, but I knew it was not about me. It was about you. I had to put you first.”

LeBron stayed with the Walkers and gushes in his tribute letter to his mother of his gratitude for the family that gave him a the same bed, football team and basketball team for a year while still giving him the ability to see his mother every weekend. It was the most secure he had ever felt in his life.

Da Real Lambo is an obscure rapper that hangs on like a leech to the James family. He and Gloria have been dating since 2011 and he has joined her family on many vacations. What is comes down to is he is just trying way too hard.

Da Real Lambo is constantly posting photos on instagram of him with the family. Multiple posts even include him wearing LeBron’s championship rings. He is only a few year Lebron’s senior but calls Lebron his “role model.” 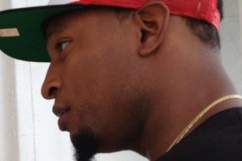 5. There Was a Rumor That She Slept With Lebron’s Former Teammate, Delonte West

At the end of the 2009-2010 season, rumors circulated that Gloria was having an affair with LeBron’s Cleveland Cavaliers teammate Delonte West. The rumors spread like wildfire but all allegations were denied and nothing was proven.

Following the news, LeBron performed extremely poorly during the Celtics vs. Cavaliers series. during the rumors popped up that LeBron James’ mom had an affair with his teammate, Delonte West.

Loading more stories
wpDiscuz
4
0
Would love your thoughts, please comment.x
()
x
| Reply
LeBron James' biggest fan is his mother, Gloria James and it is pretty well known that LeBron would do just about anything for the lady that single-handedly raised and molded him into the superstar he is today.