Yankees fans have been chanting De-rek Je-ter for 20 years, but the chant after Jeter’s speech Sunday was extra special.

The chant erupted after Jeter finished his speech after the Yankees retired his number prior to the Bronx Bombers’ game against the Kansas City Royals.

Jeter punctuated his remarks by reminding the fans that the team had a game to play. 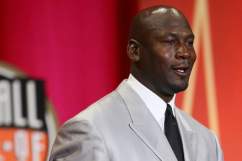