With the Ray Rice saga dominating the headlines all week, Rice’s former team delivered a dominant performance Thursday night against the Steelers.

Baltimore’s defense shut down Ben Roethlisberger and Co., Joe Flacco threw two touchdown passes to Owen Daniels, and Baltimore rolled to a 26-6 rout for its first win of the year.

Click the link below to follow our live photo gallery. You can also get a full box score here via ESPN. 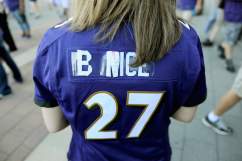 Steelers vs. Ravens Photos: The Pictures You Need to See

The Ravens indicated their rushing game will be just fine without Rice. Bernard Pierce led the attack with 96 yards on 22 carries, while Justin Forsett added 56 yards on 8 carries.

After Shaun Suisham’s field goal with 10:30 left in the third quarter made it a 4-point game, Joe Flacco led Baltimore on another long, methodical drive capped by another Owen Daniels touchdown reception — the second of the game and the second as a Raven for Daniels.

The touchdown catch came four plays after Daniels was leveled by Steelers safety Troy Polamalu — the first of two Steelers unnecessary roughness penalties in a span of three plays. (Mike Mitchell was flagged on a similar call two plays later.)

Antonio Brown Was Evaluated for a Possible Concussion

Antonio Brown is being evaluated for a possible concussion. His return is questionable.

Steelers wideout Antonio Brown left the game after suffering an apparent head injury on Pittsburgh’s opening drive. The Steelers later announced Brown was being evaluated for a possible concussion and that his return was questionable. Brown was cleared to play and returned to the game in the second quarter.

The Ravens made the Steelers pay for the turnover when Joe Flacco led Baltimore down the field on am 11-play, 56-yard drive that culminated with a 2-yard touchdown pass to tight end Owen Daniels — Daniels’ first touchdown as a Raven.

Justin Tucker’s extra point made it 7-0 Baltimore with 27 seconds left in the first quarter.

The teams traded field goals in the second quarter and Baltimore went into the half leading 10-3.

Shaun Suisham’s 43-yard field goal then brought Pittsburgh to within 10-6 with 10:30 left in the third quarter.

The Steelers drove more than 8 minutes on their opening drive and got well into Baltimore territory. But it was all moot when Justin Brown fumbled and DeAngelo Tyson recovered, giving the Ravens the ball at their own 29-yard-line with 6:31 left in the first quarter.

How to Watch the Game on TV & Online

TV: Both CBS and NFL Network will have coverage

LIVE STREAM: Unlike Fox, ESPN and NBC, CBS does not provide a free live stream of its NFL games to customers with access to a cable subscription. The game can be live-streamed through NFL Sunday Ticket, which requires a subscription.

Loading more stories
wpDiscuz
0
0
Would love your thoughts, please comment.x
()
x
| Reply
With controversy swirling around them, the Baltimore Ravens host the Pittsburgh Steelers on Thursday night. Keep it here for the score, stats and highlights.