A general view of the East Stand at Old Trafford, the home of Manchester United. (Richard Heathcote/Getty Images)

A bomb threat has caused the evacuation of Old Trafford Stadium, home of the football team Manchester United Football Club. MUFC was due to play Bournemouth for the final league game of the season, but the game has been cancelled. Find out when the game will be made up here.

BREAKING: #MUNBOU has been abandoned due to safety fears at Old Trafford. #afcb #MUFC

Manchester United tweeted from their official Twitter account that a suspicious package was found in the northwest corner of the stadium and that police were currently investigating.

Kick-off is delayed at Old Trafford after a suspect package was found in the North West Quadrant. Police are inspecting, more to follow.

It was later determined that the match would be called off altogether. Sky News reports that the 3 pm kickoff was canceled shortly after MUFC’s tweet went out and that the players were sent back to their locker rooms as the stadium was evacuated. BBC Sports reports that “Two stands – the Sir Alex Ferguson Stand and the Stretford End – were evacuated before the home game against Bournemouth and sniffer dogs brought in to search the stands.”

MUFC fans took to Twitter to discuss the abandonment of the game, tweeting:

Game abandoned please be safe! Prayers with everyone there! @Castro1021 #ManchesterUnited 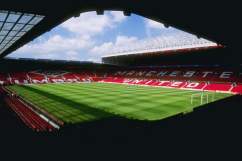 When Will the Manchester United vs. Bournemouth Game be Played?

Read More
England, Manchester, Manchester United, United Kingdom
wpDiscuz
0
0
Would love your thoughts, please comment.x
()
x
| Reply
A bomb threat has caused the evacuation of Old Trafford Stadium, home of the football team Manchester United Football Club. MUFC was due to play Bournemouth, but the game has been cancelled.