Getty Joe Rogan will return to the stage in Austin for a comedy show with Dave Chappelle.

Joe Rogan and Dave Chappelle will be returning to the stage at Stubb’s Austin Waller Creek Amphitheater for a comedy show on March 16, 2021, Rogan announced on Instagram. The duo was scheduled to perform together at the Texas venue in January, but the shows were canceled after Chappelle tested positive for COVID-19. They previously had shows together in Austin in December.

According to Rogan, tickets will go on sale on Friday, March 12 at 10 a.m. central time. According to the Stubb’s Bar-B-Q website, the tickets will be $350 per person, sold in tables of two, four or six. Tickets for the 18+ event will be available here.

The show will begin at 7:30 p.m. at the 801 Red River Street venue on Thursday, March 16, according to the Stubb’s website. Rogan relocated from California to Austin last year, building a studio for the Joe Rogan Experience in the Texas city.

Texas Governor Greg Abbott lifted COVID-19 restrictions for the state, including a mask mandate, but Stubb’s will be maintaining the same guidelines, including mandatory COVID-19 testing, that were in place during the December shows held by Rogan and Chappelle at the venue. The comedians will again perform outdoors.

According to the Stubb’s website, “Each ticket holder will receive a rapid COVID-19 antigen test upon arriving at the venue. If COVID-19 is detected by the rapid test, that individual and all members of the same household will not be allowed to enter and will be given a refund. Rapid COVID-19 antigen testing to begin at 5:00 pm. Masks MUST BE WORN AT ALL TIMES during the event, even while at your seat, except when eating or drinking.” There will be no re-entry, according to Stubb’s.

Like most Chappelle shows, there will be a ban on phones and recording devices. The Stubb’s website states, “This is a strict NO CELL PHONES ALLOWED show. Please leave your phones in your cars or at home. Anyone who brings a cell phone or smartwatch will be required to place it in a locked YONDR pouch. Everyone is subject to a pat down and wanding. Anyone caught with a cell phone inside the venue will be immediately ejected. NO CAMERAS OR RECORDING DEVICES will be allowed.” 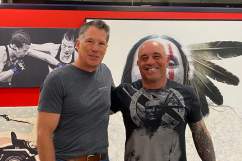 Rogan recently addressed the backlash he received from some other comics and from social media after holding shows with Chappelle in Austin in December and attending events at Stubb’s in January with Elon Musk and Grimes and posing for photos without masks.

On his March 10 podcast, Rogan said there was a “narrative” that the events were “super-spreaders,” but he said the strict rules made them safe. Rogan told former CIA officer Mike Baker, “There’s no evidence whatsoever that the virus spreads outside. And on top of that we test everyone in the crowd. It’s expensive, it takes a long time, the people get their early, we test the entire crowd. … Antigen tests for the entire crowd. It’s the way to do it and we had a great f****** time and we’re doing it again.

Rogan added, “some comics have been mad about that. But if you go and look at the comics that are mad, they’re all unsuccessful. Or super liberal and they’re virtual signaling. They’re looking to tag on to this idea that what you’re doing is bad and what we should all do is stay home and lock down. You can go outside.”

Rogan had previously talked about Chappelle’s positive COVID-19 test. The comedian was asymptomatic, according to his representatives. Chappelle’s rep told Deadline in January, “Chappelle has safely conducted socially-distanced shows in Ohio since June 2020 and he moved those shows to Austin during the winter. Chappelle implemented COVID-19 protocols which included rapid testing for the audience and daily testing for himself and his team. His diligent testing enabled him to immediately respond by quarantining, thus mitigating the spread of the virus.”

During a conversation with fellow podcaster and former UFC fighter Brendan Schaub later in January, Rogan said Chappelle caught coronavirus from someone in his circle who wasn’t involved in the shows.

Loading more stories
wpDiscuz
0
0
Would love your thoughts, please comment.x
()
x
| Reply
Joe Rogan and Dave Chappelle announced they will be returning to the Stubb's Austin stage this month.