A screenshot from a video of a man burning a Colin Kaepernick jersey. (Twitter)

Fans angry at San Francisco 49ers quarterback Colin Kaepernick over his refusal to stand for the national anthem are burning his jerseys and posting the images on social media.

One man burned the Kaepernick jersey in his backyard as he put his hand over his heart and played the national anthem. The video has been shared thousands of times on Twitter:

Some defended the man on Twitter, but others criticized him. Others just made fun of the man, with one person writing, “lmao you think youre making a statement, but really you’re burning your own money smh.” Some said it was racist to burn Kaepernick’s jersey: “So hangs a black man’s jersey from a tree, lights it on fire, to the National Anthem & thinks that is Patriotic? It is racist,” wrote one woman. Others said the man was just exercising his “free speech” like Kaepernick had done.

Kaepernick explained to NFL.com why he did not stand for the anthem, which he has done before: “I am not going to stand up to show pride in a flag for a country that oppresses black people and people of color. To me, this is bigger than football and it would be selfish on my part to look the other way. There are bodies in the street and people getting paid leave and getting away with murder.”

Another man, an Instagram user named Nate, also torched the jersey on video. “Nate” captioned the video: “My response to Kaepernick’s decision to not stand for the national anthem!” Warning: Graphic language.

“My favorite team’s player disrespected our country,” Nate says in the video. “And he did this by not standing up for the national anthem. I’m sorry, listen you ignorant son of a b-tch. People die every single day defending that flag that you refuse to stand for, and I won’t stand for that.”

The man then reveals, “This jersey was the worst $50 investment that I ever had. You, Mr. Kaepernick, if you don’t love our country, get the f-ck out of it, OK?”

“Nate” then puts the jersey in a hole in the ground and lights it on fire as the national anthem plays in the background of the video.

“You should never play another day in the NFL again. Move to Canada,” he concludes, as the jersey begins to smoke.

Reaction on the comment thread was mixed, with some applauding him and others accusing him of racism.

Kaepernick was born to a white mother and black father; his father was not in the picture and his mother gave him up for adoption to a white couple. He has discussed being treated in a racist fashion by some in the community while growing up as well as expressing his admiration for his adopted parents. 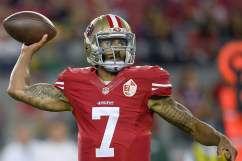 Colin Kaepernick: Why Doesn’t He Stand for the National Anthem?