Jelena Djokovic met Novak, her future husband, in high school in Belgrade in 2005 and they’ve been together ever since.

They got engaged in September of 2013, which was soon after Novak won the runner-up title at the US Open.

According to the Daily Mail, the tennis star popped the question in a helicopter to the luxury Couvent des Minimes hotel in Provence, France.

Novak’s supportive wife can usually be found on the sidelines cheering on her husband. As he plays at the U.S. Open, that may not be the case since Jelena is expecting their first child.

Here’s what you should know about the woman behind the athlete.

1. She Married Novak This Summer After He Won Wimbledon

They got married in early July and the Daily Mail reported that the wedding was originally postponed because Novak wanted to focus on Wimbledon.

That decision was for the best, as we saw on July 6, after Djokovic beat Roger Federer earning the title of Wimbledon champion.

In his post-game interview, Djokovic was sure to mention his family, saying, “If you have time, I would like to dedicate this to my future wife and our future baby.”

The ceremony was held at Aman’s Villa Milocer, which was, at one point, the summer residence of Queen Marya of Montenegro and Yugoslavian dictator Tito.

After the wedding, the happy groom told Hello! magazine, “Seeing her for the first time in her wedding dress, smiling and walking towards me… She looked like an angel.”

The bride returned the sentiment, telling the magazine, “I was just so happy and probably being pregnant makes it quite difficult to control the emotions. I am so blessed to have him in my life. I couldn’t ask for a better partner than him.”

“Jelena is pregnant!!!We will be parents soon! #blessed,” tweeted Djokovic, the world’s No. 2 singles player.

Ristic was six months pregnant on the day of her nuptials, and according to the Epoch Times, they are expecting a little boy.

It seems that because of her pregnancy, she skipped out on attendance at 2014’s Wimbledon, tweeting:

Mid day reported that Novak recently said, “Priorities change. My priorities — my family, my wife, my future kid — tennis is definitely not number one anymore.” 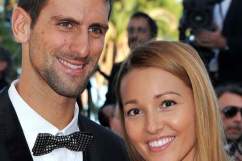 Ristic is the Chief Executive Officer of the Novak Djokovic Foundation, established in 2007.

Her fiance founded the organization to help disadvantaged children. In May, Ristic earned an award for her work with young people in Serbia.

Her bio on the organization’s page is:

Jelena Ristic was born in Belgrade, Serbia. She went to Sports high school in Belgrade, after which she moved to Italy, where she graduated in Business Administration studies at Bocconi University in Milan. In 2011, she got her Master degree in Luxury Management and Services from International University of Monaco.

4. She’s Posed as a Swimwear Model

Last year, Ristic posed in some tasteful swimsuit shots for Figleaves, a lingerie and swimwear brand.

According to Celebritynetworth.com, Ristic is pursuing a Ph.D. in management.

Her LinkedIn page show that she’s worked for the past three years as a digital marketing, branding and communications consultant.

The pair is supportive of one another’s careers and aspirations.
She told the Daily Mail, “The emotional support we give to each other is very important. It’s the same for me as well. He is very supportive and encouraging of the work that I do.” 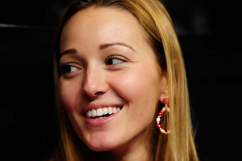 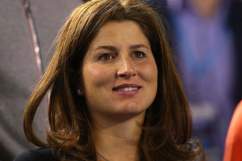 Read More
5 Fast Facts, French Open, Jelena Ristic, Novak Djokovic, Sports, Tennis, US Open, Wimbledon
Jelena Djokovic is Novak's new wife. As we watch him play in the U.S. Open, here's what you need to know about the woman who is pregnant with his child.