Adrian Peterson is like plenty of other dads in one regard: He’s married to his college sweetheart and the two have an adorable 3-year-old son.

Everything else about Peterson’s family live is far from ordinary — or orderly.

The All-Pro Vikings running back was indicted September 12 on felony child abuse charges after admitting to a Texas grand jury that he repeatedly struck one of his 4-year-old sons with a tree branch. Three days later, reports emerged that Peterson was accused of abusing a different 4-year-old son, whose mother claimed Peterson struck the boy in the head last June, and two days after that, the Vikings announced they’d put Peterson on the NFL exempt list, barring him from team activities.

Peterson avoided jail time by pleading no contest to the child abuse charge, but the NFL announced November 18 that it had suspended Peterson indefinitely while making him ineligible for reinstatement until April of 2015.

All of this came a year after yet another of Peterson’s children — a 2-year-old boy he had only recently found out about — was beaten to death by the boy’s mother’s boyfriend.

So how many kids does Peterson have?

But Erica Syion, the mother of one of of Peterson’s kids, told TMZ last year that the former Oklahoma standout actually has seven kids.

The identities of all seven aren’t clear, but the total includes a baby girl born last year who lives with her mother in Minnesota. It also includes both of the sons Peterson is accused of abusing, along with Adrian Jr. whose mother is Peterson’s wife, and Tyrese Robert Doohen, the boy who died last year.

He has fathered six children by six women, and the children live in at least three states — Minnesota, Georgia and Texas — according to court records reviewed by the Star Tribune, and according to sources familiar with his family. He met one of those children, a son, shortly before the boy died last year in South Dakota after being beaten by another man. 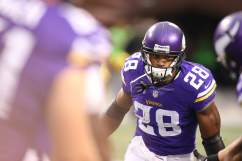