Watching Thursday night’s game between the Falcons and Buccaneers was like watching an NFL heavyweight against a high school team.

The Falcons scored early, often and in seemingly every way possible: On passing plays, rushing plays by running backs and on both a rushing play and a record-setting punt return by Devin Hester.

Atlanta is 2-1 Tampa Bay is 0-3 with two more road games next on the schedule after the Falcons obliterated the Bucs 56-14 at the Georgia Dome.

The Falcons Offense Was Unstoppable From the Get-Go

Matt Ryan apparently wasn’t affected by being hit in the eye with pyrotechnics before the game. Matty Ice picked apart the Tampa Bay defense on the Falcons’ opening drive, leading a 6-play, 70-yard drive capped by a 3-yard touchdown pass to Harry Douglas that made it 7-0 Atlanta less than 3 minutes into the game.

Ryan continued to shred the Bucs defense on Atlanta’s next drive, with a bizarre fumble mixed in. Levine Toilolo fumbled after catching a pass from Ryan and Alterraun Verner picked up the ball in mid-air. But Toilolo made it only 8 yards before Devin Hester knocked the ball loose and recovered the fumble, returning the ball to the Falcons.

Ryan picked up where he left off when Atlanta got the ball back, hitting Julio Jones from 8 yards out to make it 14-0 with 3:03 left in the quarter.

Atlanta had 18 first downs in the half to Tampa Bay’s 2 and out-gained the Bucs 300-62 in total yards en route to a 35-0 lead that was tied for the biggest halftime advantage in team history. 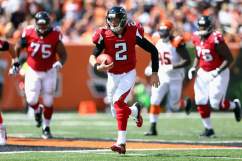 WATCH: Matt Ryan Hit in the Eye With Pyrotechnics

Kemal Ishmael Picked Off Josh McCown & Took it to the House

As if things weren’t going poorly enough for the Tampa Bay defense, Kemal Ishmael picked off Josh McCown and took it 23 yards to the house to make it 21-0 Atlanta with 2:38 left in the first quarter.

Atlanta made it 28-0 when Hester scored on a 20-yard end-around on the first play of the second quarter.

Hester wasn’t done with the heroics after his rushing touchdown. The special teams legend scored on a 62-yard punt return with 7:06 left in the first half, passing Deion Sanders for first place on the all-time return touchdown list with the 20th of his career.

Hester was flagged for unsportsmanlike conduct on the play when he honored Sanders by high-stepping it into the endzone.

Josh McCown Left the Game With a Thumb Injury

Josh McCown added injury to insult when the Bucs QB was replaced by Mike Glennon in the second quarter after suffering what the team described as a right thumb injury.

McCown was dismal before getting hurt, completed just 5 of 12 passes for 58 yards, no touchdowns, an interception and a putrid 22.2 passer rating.

Julio Jones Made a Spectacular Grab for His 2nd Touchdown

Tampa Bay scored two garbage-time touchdowns to make it 56-14, but by that time Falcons coach Mike Smith had emptied his bench and the outcome was a mere formality.

Read More
Football, NFL
The Tampa Bay Buccaneers are looking for their first win when they play the Atlanta Falcons Thursday night. Keep it here for the score, stats and highlights.