5-Year-Old JP Gibson Plays for the Utah JazzGibson, who was diagnosed with acute lymphoblastic leukemia in 2012, was in uniform and joined the Jazz on the bench for tonight’s open scrimmage.2014-10-07T02:54:32Z

JP Gibson is the Utah Jazz’s new hot-signing in the NBA. The 5-year-old was diagnosed with leukemia in 2012, on October 6, 2014, the Jazz signed him to a one-day contract with the team.

Welcome to the Jazz, JP! pic.twitter.com/kI36etzAK2

He came on to play in the Jazz’s pre-season scrimmage game and as he dribbled through, going to the hole, he was held up by center Rudy Gobert so that Gibson could slam it home.

Nice work from the Utah Jazz. 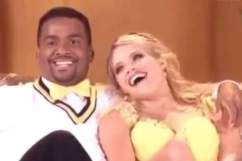 WATCH: Alfonso Ribeiro Does The Carlton Dance on ‘Dancing With the Stars’

Read More
Basketball, Breaking News, NBA
JP Gibson, a 5-year-old sufferer of leukemia, came on for the Utah Jazz in a scrimmage game and for a few seconds, everything in the world was okay.