Amid damning reports that Florida State administrators obstructed the Jameis Winston rape case, the university has set up a disciplinary hearing to determine whether the Heisman Trophy winner violated the FSU’s code of conduct when a female student says he raped her in December 2012.

The hearing comes with the university’s reputation in tatters and a federal civil rights investigation under way into the university’s handling of the case, which critics say was designed to protect Winston and was run with a callous disregard for the alleged victim.

State’s attorney Willie Meggs (pictured) told Fox Sports that his investigation was hampered by the fact that Jameis Winston’s attorney got a copy of the police report in Winston’s rape case before Meggs. (Getty)

Winston was never charged with a crime, but a bombshell report published Friday by Fox Sports lays out the case that prosecutor Willie Meggs was severely hampered in his investigation because Florida State officials got their hands on the police report involving Winston and leaked it to Winston’s attorney before Meggs even saw it.

Among the revelations in the Fox report are that Winston’s attorney had access to the police report a full four days before Meggs and that the attorney, Tim Jansen, obtained sworn affidavits from two FSU players who witnessed the alleged assault, ensuring that they had their stories straight before they could be interviewed by Meggs’ team of investigators.

The report paints a stunning picture of a conspiracy between Florida State’s police department, athletic department and administration to protect Winston and ensure minimal negative publicity for the university.

It has been long suspected that someone slipped Jansen the police report before turning it over to Meggs, but until now it had never been clear who could have acted as the conduit from the Tallahassee Police Department to the attorney.
Meggs told FOX Sports that in hindsight he has wondered whether he should have sought a search warrant for Jansen’s office to retrieve the reports and seek answers about who got them. However, he said he believes strongly that someone in the athletic department at Florida State turned them over to Winston’s lawyer.

The Fox report came out the same day as scathing report from the New York Times documenting what the paper called the “towering presence of Florida State football” casting a “shadow over justice in Tallahassee.”

Now, an examination by The New York Times of police and court records, along with interviews with crime witnesses, has found that, far from an aberration, the treatment of the Winston complaint was in keeping with the way the police on numerous occasions have soft-pedaled allegations of wrongdoing by Seminoles football players. From criminal mischief and motor-vehicle theft to domestic violence, arrests have been avoided, investigations have stalled and players have escaped serious consequences.

In the time since Meggs announced last fall that he wasn’t pressing charges, Winston has been a walking public relations disaster for the university. In addition to admitting to stealing a bag of crab legs from a grocery store, FSU suspended Winston for a game earlier this season after he shouted an extremely vulgar phrase in the middle of the FSU student union.

The disciplinary hearing is set to take place almost two years after the allegations of sexual assault surfaced. Why such an enormous delay?

Florida State claims it didn’t initiate a process by which the university could discipline Winston until August 4, 2014 because until that point, the alleged victim had not agreed to give a statement to school officials.

Once university officials finally interviewed the woman, the school opened an investigation into the woman’s claims that could result in Winston being charged with up to four violations of the student conduct code.

The university laid out its version of the events in “open letter” to the Florida State community that it said it was publishing in order to set the record straight amid a “drumbeat of misinformation.”

From the letter, as reported by the Orlando Sentinel:

· In May 2014, FSU brought student conduct charges for invasion of privacy against the two athletes who witnessed the sexual encounter. At the University’s invitation, the complainant appeared at the May 20 hearing and testified about the incident. During the complainant’s visit, FSU reiterated its willingness to take her statement about the athlete she alleged had assaulted her.

· As disclosed by the complainant’s attorney and widely reported in the media, on Aug. 6, 2014–after multiple requests by FSU over the previous 20 months–the attorney agreed to make the complainant available for an interview. Based on her statement, the University reopened a confidential Title IX investigation and, once again, sought a statement from the athlete.

· In a letter to the University that was widely publicized by the media, the athlete’s attorney informed FSU his client would cooperate with the investigation but raised doubts as to whether the University could guarantee his right to due process. The attorney argued that the University had been compromised by an “untenable conflict of interest,” in which it had to find the athlete responsible or else face a civil lawsuit, sanctions from the federal government and public and media criticism.

According to the Times, though, the university made no attempt to contact the alleged victim after the allegations were made and decided not to discipline Winston after meeting with Winston and his attorney.

From the Times’ report:

According to a statement released by the university on Tuesday, senior athletic department officials met with Mr. Winston’s lawyer, Mr. Jansen, within days of his identification as a suspect and quickly concluded that “there were no grounds for further action.” The accuser’s former lawyer, Patricia A. Carroll, said the department did not contact her at the time to get her client’s side of the story.

Although Florida State was legally obligated to conduct a “prompt, thorough and impartial” disciplinary inquiry, the university chose not to, as the team marched to the national championship. “This is exactly the cover-up we suspected,” Baine P. Kerr, a lawyer for Mr. Winston’s accuser, said in a statement responding to the new information. “Coach Fisher and his associates ‘concluded’ that they would keep it to themselves. But football coaches don’t get to decide whether schools investigate athletes for rape.”

3. A Panel of People Outside the University Will Conduct the Hearing

A view of Doak Campbell Stadium at Florida State during FSU’s game against Clemson September 20. Florida State convened an independent panel to review the Jameis Winston case amid Winston’s lawyer’s claims that the university has a conflict of interest in the matter. (Getty)

Because of the concerns about conflict of interest outlined by Winston’s attorney, Florida State has set up an extremely unusual process for Winston’s disciplinary hearing: The case will be handled by a three-person panel of people not associated with Florida State, but appointed by the university to handle the case. Both Winston and the alleged victim have the option of striking one of the three panelists.

FSU spokesperson Browning Brooks explained the rationale for the unconventional approach to ESPN:

To ensure an absolutely fair and impartial process, and to avoid any conflict created by the ongoing federal investigation and threatened civil litigation, the University will appoint an independent hearing officer to investigate and make findings regarding this matter. The use of an outside hearing officer is allowed under FSU procedures. Out of fairness to the students involved, we are exercising this option to remove any doubt about the integrity of the eventual outcome.

John Clune, the attorney representing the alleged victim, told ESPN the setup is “a highly unusual process, and the decision to avoid making a charging decision is a way to get around making a determination about interim football suspensions.”

ESPN reported that university officials sent Winston and his attorney a letter on Friday notifying them that Winston might be charged with as many as four violations of the conduct code, two of which involve sexual conduct.

4. Winston Could Avoid Some of the Damage by Dropping Out of School

Michael McCann, a prominent Massachusetts attorney who founded the Sports and Entertainment Law Institute at the University of New Hampshire Law School, wrote a column Saturday for Sports Illustrated under this eye-grabbing headline: Jameis Winston’s best legal move may be to drop out of Florida State.

McCann lays out the case for dropping out of FSU, which he calls a “radical” idea, as follows:

Winston’s participation in the university’s disciplinary process would carry great legal risk for him. A university disciplinary hearing would involve both fact-finding and testimony. Law enforcement or attorneys for Winston’s accuser could later attempt to subpoena these materials and use them against Winston. While a finding that Winston violated university rules would not mean that he broke any laws, the finding would likely be admissible evidence in a prosecution or civil litigation.

McCann also lays out the downside of such a move:

Dropping out of Florida State would obviously not be a “cost free” move for Winston. Critics would contend that Winston is admitting fault by sidestepping the university’s investigation. They would deduce that if he’s really innocent, he should be willing to answer questions about what happened the night he is accused of raping a woman. This critique might be unfair, but it would be very easy to make and would undoubtedly harm Winston’s reputation.

Seminoles fans, in particular, would be disappointed if not outraged with Winston should he quit on the team, which is currently ranked No. 1 in AP poll.

The mere suggestion of Winston dropping out, though, is an indication of the intense pressure he’s under as the process unfolds.

5. The Department of Education Is Investigating FSU’s Handling of the Case

Winston’s upcoming hearing comes as the Department of Education’s civil rights office continues an investigation launched in April into whether FSU violated the complainant’s Title IX rights in its handling of the investigation.

Title IX, a portion of the Education Amendments of 1972, requires that no student at a university receiving federal assistant be discriminated against because of his or her gender.

USA Today’s Rachel Axon explained the process in her April 4 report on the investigation:

Sexual harassment and violence are considered forms of sex discrimination under the 1972 federal law, which requires colleges and universities that receive federal funds to investigate claims of sexual assault and provide a timely and impartial grievance procedure to resolve those claims. Non-compliance with the law can result in the department revoking federal funding, although that has never happened.

Florida State is now facing pressure from several fronts: From the complainant’s attorneys, who have been critical of the university’s handling of the woman’s rights; from Winston’s attorney, who has expressed concerns over Winston’s rights to due process; from the media and public, which have been outraged by the university’s handling of the case; and from the Department of Education.

Winston, meanwhile, remains on the active roster for the Seminoles, who are undefeated but who fell to No. 2 in the polls released Sunday as surging Mississippi State — a feel-good story with an affable, clean-cut quarterback in Dak Prescott — jumped to No. 1. 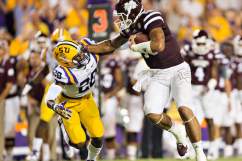