As Peyton Manning has piled up wins and career milestones, his wife, Ashley, has been with him the whole way. The former Ashley Thompson began dating Manning before he even played a game in college and married him early in his tenure with the Indianapolis Colts.

The family consisted of just Ashley and Peyton for most of Peyton’s career, but the Mannings welcomed two additions to the family with the birth of twins in 2011.

Read on for more about Ashley and the kids.

The Mannings welcomed twins — a daughter named Mosley and a son named Marshall — in 2011. As this 2012 CBS Denver feature points out, neither Ashley nor the twins were at Peyton’s introductory press conference in Denver, continuing a tradition of staying out of the spotlight. But Peyton told the station his family as excited about the move to Denver.

“I think they’ll be just fine,” he told the station. “It’s a great place to live, so it will be exciting.”

Marshall got some time in front of the cameras in a 2012 interview (featured in the video above) his dad did about teammate Marvin Harrison.

“My entire family keeps me positive and they always support me,” Peyton told People magazine prior to the Super Bowl in February. “They will be coming to town to be with me. Without them, I would not be where I am today. I am very grateful.”


2. Ashley Stayed Out of the Spotlight & Initially Declined to Talk About the Twins

Ashley, who has stayed almost completely out of the spotlight throughout her husband’s career, wasn’t keen on talking about the birth of Marshall and Mosley, telling the Indianapolis Star at the time, “We value our privacy and would appreciate you not putting this in the paper or online.”


Maybe there’s more to this story that demands a certain level of privacy. Maybe these twins were adopted, or perhaps there was a surrogate mother. That might explain why seemingly no one knew the Mannings were expecting. Maybe the stork brought them, or perhaps the very same alien technology that created Peyton’s large, bulging cranium discovered a way from him clone himself. Who knows? More importantly, who cares?

Doesn’t matter how they got kids. The fact is they have them, and it’s GREAT! Ashley Manning refusing to confirm a story Peyton’s own mother has confirmed (she also told her hometown newspaper) is odd and borderline silly. Respecting privacy is one thing. However, the very same public that allows Peyton the opportunity to earn tens of millions of dollars a year playing a game for a living has the right to know when he became a father for the first time. It’s as simple as that.

Here’s the news item to which Wells was referring, from the Neshoba Democrat in Mississippi:

Exciting news from the NFL, times two! Peyton and Ashley Manning are the parents of twins, Marshall Williams Manning and Mosley Thompson Manning, a little football player and a cheerleader, born March 3l, 20ll, in Indianapolis, Ind. They are being welcomed by their cousin, Ava Frances Manning, born March 2l, 20ll, to Eli and Abby Manning.

One of the best video clips from this year’s training camp was of Marshall and Mosley playing with Peyton on the field. Watch the clip in the video above.

3. Ashley Became a Minority Owner of the Memphis Grizzlies in 2012

Ashley Manning became a minority owner of the Memphis Grizzlies in 2012. (Getty)

In 2012, Ashley joined a group that included Justin Timberlake, Penny Hardaway and former Congressman Harold Ford Jr. and became a minority owner of the Memphis Grizzlies, who had been sold to a group led by Robert Pera, the team’s chairman and controlling owner.

The Memphis Flyer posted a breakdown of the ownership group reporting that Ashley paid $5 million, giving her a 2.84 percent stake — the same stake purchased by Timberlake’s group and double the stake purchased by Hardaway, who starred at what was then called Memphis State before teaming up with Shaquille O’Neal to lead the Orlando Magic to the NBA Finals in 1995.

The Denver Post reported at the time that Ashley pursued an ownership stake to make sure that the Grizzlies remained in Memphis.

Ashley addressed the purchase in a brief statement published by the Post:

I am very excited to make the commitment to join the potential new ownership group of the Memphis Grizzlies. As a native of Memphis, it was important to me that the Grizzlies remain in Tennessee and continue to have a positive impact on the community.

Here’s how the Memphis Commercial-Appeal described the ownership group:

It’s a big group, with some 24 individuals or entities as presented by the team in a news release. There are lifelong Memphians and those who may never have stepped foot in our city. There are the well-known (Justin Timberlake, say) and the lesser known (Michael Savit? Barry Klarberg?)

And how the paper reported Ashley’s involvement after talking to CEO Jason Levien:

And then there’s Memphis native Ashley Manning, the wife of Denver Broncos quarterback Peyton Manning. Ashley Manning wasn’t at Monday’s announcement and Levien said he had not yet met her.

“I met her lesser-known husband,” he deadpanned.

4. Ashley Started Dating Peyton Before His Freshman Season at Tennessee

Ashley Thompson started dating Peyton when Peyton was a blue-chip recruit heading to the University of Tennessee. Ashley had grown up in Memphis, and her neighbor introduced her to Peyton.

She talked about the beginning of her relationship with Peyton in a lengthy 2006 profile in Indianapolis Woman magazine.

She was introduced to Peyton by her parents’ next-door neighbor the summer before Peyton’s freshman year in college.

The neighbor had played football at the University of Tennessee and hosted Peyton on a recruiting trip. The neighbor thought Ashley and Peyton would be perfect for each other. Ashley remembers her first impression of Peyton was that he seemed very genuine

Ashley told Indianapolis Woman that volunteerism was a big part of her childhood.

“Both my parents made it a point to involve us,” Manning says. “They taught by example.” She remembers visiting one particular disadvantaged family as a child. “My dad took us,” she says. “I think he had given them a car. We would play together and we were so much like those children, but then I would come home to my house where I had everything I needed. My life was so different. It really made an impact on me.”

As Peyton’s career has taken off, so have the Mannings’ charitable endeavors. The couple’s giving is highlighted by the fundraising they’ve done for the children’s hospital at St. Vincent’s Hospital in Indianapolis, which bears Peyton’s name. 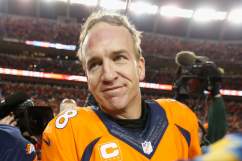 The Mannings got married in Memphis on March 17, 2001 — St. Patrick’s Day. The date factored into Manning’s career 11 years later, when he put off a decision on which team to sign with as a free agent so he and Ashely could celebrate their 11th anniversary in Tennessee’s Smokey Mountains.

From a 2012 Denver Post story on Manning’s pending decision:

Today is 11-year wedding anniversary of Peyton and Ashley Manning. They had plans to spend their anniversary somewhere in the Smokey Mountains area, according to an NFC source.

Which is why when Peyton Manning did throw for the Tennessee Titans this morning, he did so in Knoxville, Tenn.

Manning held his throwing audition for the Broncos (Friday) and San Francisco 49ers (Tuesday) on the Duke University campus of Durham, N.C.

At this point, Manning’s presence in the Smokies has to make the team near the Rockies a tad uneasy.