Jameis Winston has few good options as he prepares for a disciplinary hearing amid allegations that he raped a fellow Florida State student in 2012.

Winston hasn’t been charged with a crime in the case, but he faces up to four charges of violating the university’s student conduct code and faces penalties as severe as expulsion when an independent board appointed by the school hears the case.

With potential legal trouble on the horizon in addition to a worse-than-horrible reputation that’s already causing his draft stock to plummet, a prominent sports lawyer suggested this past weekend that Winston’s best move might actually be dropping out of Florida State.

Michael McCann, a prominent Massachusetts attorney who founded the Sports and Entertainment Law Institute at the University of New Hampshire Law School, wrote a column Saturday for Sports Illustrated on the topic.

McCann lays out the case for dropping out of FSU as follows:

Winston’s participation in the university’s disciplinary process would carry great legal risk for him. A university disciplinary hearing would involve both fact-finding and testimony. Law enforcement or attorneys for Winston’s accuser could later attempt to subpoena these materials and use them against Winston. While a finding that Winston violated university rules would not mean that he broke any laws, the finding would likely be admissible evidence in a prosecution or civil litigation.

McCann also lays out the downside of such a move:

Dropping out of Florida State would obviously not be a “cost free” move for Winston. Critics would contend that Winston is admitting fault by sidestepping the university’s investigation. They would deduce that if he’s really innocent, he should be willing to answer questions about what happened the night he is accused of raping a woman. This critique might be unfair, but it would be very easy to make and would undoubtedly harm Winston’s reputation.

Seminoles fans, in particular, would be disappointed if not outraged with Winston should he quit on the team, which is currently ranked No. 1 in AP poll.

The mere suggestion of Winston dropping out, though, is an indication of the intense pressure he’s under as the process unfolds. 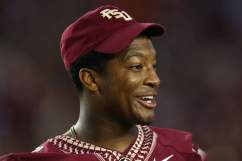