Georgia will be without its best player — and perhaps the best player in the country — indefinitely after the school announced that it had suspended Heisman Trophy frontrunner Todd Gurley indefinitely pending an investigation into potential NCAA rules violations.

Heres’s what you need to know:

Though the matter being investigated involves NCAA rules and not team rules, the suspension was issued and announced by Georgia, which is preparing for an SEC showdown Saturday against Missouri.

I’m obviously very disappointed.The important thing for our team is to turn all our attention toward preparation for Missouri.

2. Gurley’s Future at Georgia Is in Question

Georgia said the suspension is indefinite, raising the possibility that Gurley, a junior, will never again suit up for the Bulldogs.

A junior with explosive speed and athleticism, Gurley is considered an elite NFL draft prospect and is widely expected to turn pro at the end of the season.

CBS’ NFL Draft Scout ranks Gurley as the No. 1 running back and No. 15 overall player in next spring’s draft.

3. The Investigation Involves the Use of Gurley’s Likeness

Multiple media outlets are reporting that the investigation is into whether Gurley profited off of his likeness.

It’s against NCAA rules for players to profit on items such as autographs or memorabilia.

A source told ESPN’s Joe Schad that the NCAA investigation centers around whether Gurley was given money for autographs, memorabilia or the use of his likeness. Georgia officials did not reveal the alleged violation.

Sports Illustrated’s Andy Staples reported Thursday that an unidentified dealer reported to Georgia’s compliance office this week that he paid Gurley $400 to sign 80 pieces of memorabilia on UGA’s campus last spring. Staples reported that the dealer claimed to have a photo and video of Gurley signing the items, but that neither the photo nor the video show money exchanging hands.

4. A Memorabilia Dealer Predicted on September 27 on Reddit That a High-Profile Player Would Be in Trouble

Here are all the relevant quotes implicating Gurley from Sept 27 (with date stamp). pic.twitter.com/0ruO8zTrGT

An unidentified memorabilia dealer wrote in a September 27 Reddit post that an unnamed by high-profile player would likely be getting busted for profiting off of memorabilia sales.

The user referenced an “Ask Me Anything” (AMA) forum he had conducted in March in which he talked about his dealings with an unnamed player, with strong hints that the player was Gurley.

You can read the original March 27 AMA thread here.

The dealer pointed out that there’s an enormous amount of Gurley memorabilia for sale on E-Bay — an amount that, as the Big Lead points out, is nearly four times the amount of memorabilia signed by Oregon quarterback Marcus Mariotta.

It is correct, person who did AMA claiming to buy autographs from NCAA plyrs did post a while back claiming someone was about to be busted.

He would not name names, but told us to look at eBay; the number one candidate from his region was Gurley. We posted it here first.

In the March 27 thread, a Redditer asked the dealer how common it was for players to agree to sell their memorabilia and whether it was common for players to reject offers from dealers. The dealer answered that players commonly turn down requests for money and named Robert Griffin III, Tim Tebow and former Georgia quarterback Aaron Murray — Gurley’s former teammate — as players who played by the rules.

The illiciit autograph dealer had this convo in his AMA back in March that now has a whole new layer to it: #Gurley pic.twitter.com/3Gh8QZbreF

It’s not illegal for college players to sign autographs, but it is illegal for them to profit off of them — an issue that prompted an investigation into a ton of autographs that Johnny Manziel signed at a New Haven, Connecticut hotel before the start of the 2013 season. 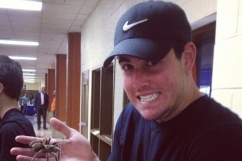 5. Gurley Had 8/5 Odds to Win the Heisman Before the Suspension

Entering the day, Bovada listed Gurley as the favorite to win the Heisman, just ahead of Mississippi State quarterback Dak Prescott and Auburn quarterback Nick Marshall.