Jalen Jenkins hit the shot of the year so far in college basketball when he sunk a 75-footer at the buzzer to lift George Mason to a 64-63 win Saturday over Manhattan.

With the Patriots trailing by 2, Jenkins rebounded a missed free throw, took a few dribbles and then heaved up a prayer that found its way into the net as the buzzer sounded.

The Jaspers are no strangers to buzzer-beaters this season. Manhattan pulled off on of its own — albeit from much closer range — with a buzzer-beating alley-oop from Emmy Andujar to Rich Williams that sent the team’s game against UMass into overtime November 18 during ESPN’s college basketball marathon earlier this month.

Manhattan went on to lose that game 77-68 in overtime. 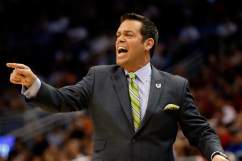 WATCH: Manhattan Alley-oop at the Buzzer vs. UMass