Manhattan pulled off the most eye-opening play of the young college basketball season Tuesday when the Jaspers tied the game at UMass and forced overtime on a buzzer-beating alley-oop from Emmy Andujar to Rich Williams.

The play came just after UMass turned the ball over on an in-bounds pass while leading by 2 in the final seconds.

What could have been a disaster ended with a happy ending for UMass, which played its best 5 minutes of the game in overtime and won 77-68 to improve to 3-0. 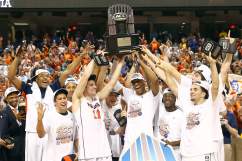 Read More
Basketball, Breaking News, College Basketball
Manhattan delivered the most eye-opening play of the young college basketball season with a game-tying alley-oop at the buzzer Tuesday at UMass.