Due to our nation celebrating it’s hard fought right to vote by not doing so, we were off last week. Anything new and exciting happen? No? Cool. We’re back this week to talk about your weekend NFL schedule. But first, something completely insane: Aldon Smith has to pay the San Francisco 49ers for the right to play football this year. To be clear, Smith was suspended because he acted like an idiot, but the fact that he has to pay his employer for the right to potentially incur a career ending and life changing injury is utter madness. If I were Smith I’d just say “screw it” and wait till next year. Sure, he’d be taking a chance that a bunch of talking heads would say he “Doesn’t love football enough” or that he’s “Selfish” and both of those things would have a kernel of truth to them, but he’d certainly be more employable than if he gets his knee blown out by an offensive lineman while–again, let me repeat this–PAYING THE SAN FRANCISCO 49ERS FOR THE RIGHT TO BE THEIR EMPLOYEE.

I know the disconnect between fans and players is fairly stark, but even the biggest “It’s an honor and privilege to put on that jersey, son!” drunk dude at your tailgate can see that this is, at best, grotesquely unfair. The most sacred thing you can give something is your love. The second most sacred thing you can give is your labor. Being told to pay for the right to give someone your labor is pretty much the opposite of how the free market is supposed to work.

Put it this way: Would you pay your boss for the right to show up to your job? That’s what I thought.

So apparently, if you let Ryan Tannehill run around a little bit, he becomes exponentially better at playing quarterback. Good to see that Regis Philbin and the rest of the Dolphins coaching staff have noticed, because that makes the team dramatically more interesting on the field. Meanwhile, Buffalo has gotten competent play from Kyle Orton and all of a sudden these two teams are interesting for the first time in a while. Again, this could be fools gold and since this is a Thursday game, it will inevitably take its place as a half-watch that’s only sorta worth your time.

Damn it, Team Gumbo, you are frustrating as all get out this year. Thankfully your division is a hot mess, so perhaps this is the year a 6-10 team limps its way into the playoffs because every division winner has to put one in there. Something to shoot for! History baby! The AFC North is the yin to the NFC South yang. Everybody has a winning record there–yes even the team that lost to the Jets (THE JETS) last week–and the Bengals are no exception. But you come to me, particularly with this game, for hate. Here it is: the last-place team in the AFC North will probably have a better record than the team that wins the NFC South. Think about that and boo till your heart is content.

Just kidding Carson Palmer is hurt. Again. Mere hours after signing a contract extension. That’s some cosmic level injustice for fans of these birds. What’s more is how much fun the team was; winning with a stout defense and solid play from Palmer and his supporting cast and, when he was called upon, Drew Stanton. Well, Drew, it’s your team now. Who are you up against? Oh just the best defense in football. Detroit does less stupid things now, which means that even though Calvin Johnson fantasy owners have wept repeated Sundays this year, the team is still competent in a division that looks like it’ll have just two teams racing for the playoffs. But the hate in this game is just seeing the Cardinals try to figure out the rest of their season without Palmer. You have to hate, hate, hate that injury for him and for that team. Only Bruce Arians and his hipster hat can give one hope that he’ll wizard his way to a playoff spot.

This dude ran about for plays against the Giants last week: naked bootleg then run for a first down, hand off to Marshawn Lynch, sling it to the crossing route and scramble to get the wideouts open. He ran for so many first downs against the Giants you’d have thought the Seattle offense was running a single-wing, Florida Gators-style. And the Giants could not stop it to save their lives. It’s almost as if Wilson was sending a message though his style of play. I wonder what the message is in response to? By the way, the Chiefs are hanging in there this year and that is damn impressive. I totally had them pegged for a regression, but they are hanging around in a good division. Respect, Kool-Aid Man. Respect.

A game involving Aaron Rodgers and I’m way more intrigued by the opposing quarterback? It’s true! Mr. Buttfumble himself is the toast of the league driving Chip Kelly’s juiced up offense with more weapons around him than he ever had in New Jersey. And good for Mr. Buttfumble. It’s impossible to not want to see good things for the guy. I mean, I guess it’s possible to want horrible things for the guy, but that’s only if you’re a terrible person–and you may be! The quarterback who didn’t buttfumble is also in this game and rumor has it he’s pretty good. The over under is 55.5. I find that intriguing. Just saying.

This is a crazy-good game. I don’t need to sell you on the need–nay, the total constitutional requirement!–that you watch the hell out of this game. You shall do so by the direction of our lord and savior Tom Brady! Flex scheduling and the Redzone are two of the best things to ever happen to NFL fans. Uggs and Neckbeard in Primetime. Glorious.

This isn’t really a pop culture reference, but as I’m writing this column my internet is being all sorts of shady and it is driving me crazy. I’m a fairly patient person, particularly for someone in my demographic, but when the internet is this freaking slow, I become one of the worst people alive. Awful. It also impacts my ability to get stuff done, which makes me want to quit doing work all together. Damn slow internet. Damn it straight to hell.

SKEPTICAL SIERRA’S ‘DOG OF THE WEEK

It’s one thing to get by with Drew Stanton for a few games, armed with the knowledge that Carson Palmer would be back. It’s another to know that he’s the guy for the rest of the year, and that the quarterback your franchise just invested serious money in is holding a clipboard and going through rehab on legs that weren’t that healthy to begin with. And yet Arizona is still laying points? Neither Sierra or myself could believe it. I put on some highlights of the Lions and Sierra started wagging her tail and barking. She’s starting to feel confident with this betting thing, and has already started spending her winnings on new chew-toys in her head, whenever she’s not thinking about food, which is always. Sierra got her first win betting on Arizona and her second betting against them. She seems to have a real good feel for that team. I feel confident that I’m not misrepresenting her wishes at all.

Toby: We’ve been navigating by the North Star, which turned out to be the Delta shuttle from LaGuardia.

Enjoy the games, the weekend and this wonderful time of year, everyone. 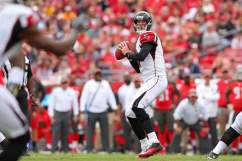