After building a huge lead in the first half, No. 9 Arizona State held off a comeback attempt from No. 10 Notre Dame for a 55-31 win.

Here is a link to stats.

After Notre Dame hit an opening drive field goal, Arizona State has completely dominated the Irish, scoring 31 consecutive points to take a 31-3 lead halfway through the second quarter. The Sun Devils’ latest touchdown was a long pass for a touchdown (vine above).

Irish Score Right Before Half

After Arizona State added on to its lead with a field goal to make it 34-3, Notre Dame was able to drive down the field before scoring its first touchdown right before halftime to cut Arizona State’s lead to 34-10.

Notre Dame quarterback Everett Golson – who threw two interceptions in the first half – hit receiver Will Fuller for a nine-yard touchdown pass with just 11 seconds remaining in the half to cap off the drive (pictured above).

Irish Make a Comeback in 2nd Half

After stumbling in the first half, Notre Dame is making a strong comeback attempt in the second half. The Irish have scored three touchdowns in the second half to cut Arizona State’s lead to 34-31 with just over six minutes remaining.

ASU Comes Up With Two Big Plays to Preserve Win

With the game no longer in doubt, Arizona State went for it on fourth-and-goal with 55 seconds remaining and Taylor Kelly ran it in for the Sun Devils’ final score.

At the beginning of the season, Notre Dame vs. Arizona State was not expected to be a battle of Top-10 teams. But the winner of Saturday’s matchup will keep its playoff hopes alive, with the loser being essentially eliminated from contention.

If No. 9 Arizona State wins, it’ll have a marquee win on its resume that will bolster the Pac-12’s case if either ASU or Oregon emerges as the conference champion. For No. 10 Notre Dame, the Irish are looking to win a big game on the road – something they failed to do when they fell in a close game at Florida State last month.

Both squads rely on solid defenses built around pressure that can slow down top opposing offenses, but not shut them down. The Sun Devils were absolutely shredded on defense against the UCLA Bruins, but have since rebounded, while the Irish have trended negatively, with breakdowns against North Carolina and Navy.

McCain At the Game

Arizona senator John McCain is at Saturday’s matchup to do the coin toss. Before the game, McCainposed for a picture with Arizona State’s mascot. 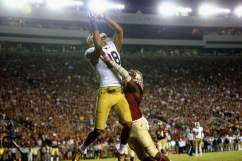