Jameis Winston threw interceptions on each of Florida State’s first two possessions Saturday against Florida, and the second one came on one of the most spectacular defensive plays of the year.

With the Gators already up 3-0 after cashing in with a field goal following Winston’s first pick, Florida’s Quincy Miller made a diving, juggling catch to give Florida the ball back with the chance for more.

The Florida defense looked like it had forced a 3-and-out on Florida State’s first possession, but the Seminoles came away with a first down when Chris Thompson was flagged for roughing the kicker.

The Gators ended up with the ball anyway, though, when Jabari Gorman picked off a pass from Winston on the next play, and Florida cashed in on the turnover when Austin Hardin kicked a 52-yard field goal to put the visitors up 3-0 with 12:37 left in the first quarter.

The two picks were the 11th and 12th Winston has thrown during the first half of games this year. 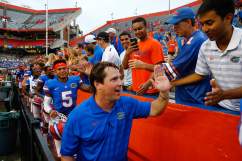