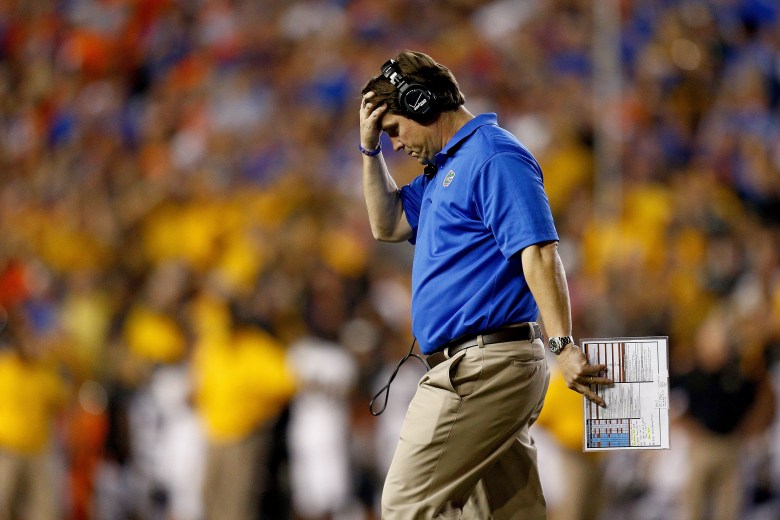 Will Muschamp will not return at Florida’s head coach next season. (Getty)

Once again, Florida State struggled against an inferior opponent. Once again, Jameis Winston played a flawed game. But once again, the Seminoles escaped with a win Saturday.

Winston threw a career-high four interceptions, but FSU held off Florida 24-19 in Gators coach Will Muschamp’s last game, keeping its College Football Playoff hopes intact with only the ACC championship game against Georgia Tech standing in its way.

Click here for the full box score and read on for a recap.

FSU Took the Lead on a Nick O’Leary Touchdown Catch

Florida State took its first lead with 8:12 left in the first half, when Nick O’Leary made an acrobatic catch in the endzone on a 10-yard pass from Jameis Winston.

The touchdown strike capped a methodical 12-play, 93-yard drive that took 5:03 to complete and gave the Noles a 14-9 lead.

FSU extended the lead to 21-9 when Winston hit O’Leary from 6 yards out with 2:14 left in the half, but the Gators responded with a 15-yard touchdown pass from Treon Harris to Clay Burton to make it 21-16 with 47 seconds left in the half.

The Noles got on the board with 1:12 left in the first quarter, when Terrance Smith picked off Treon Harris and took it 94 yards to the house with some help from a vicious block by Jalen Ramsey.

The Florida defense looked like it had forced a 3-and-out on Florida State’s first possession, but the Seminoles came away with a first down when Chris Thompson was flagged for roughing the kicker.

The Gators ended up with the ball anyway, though, when Jabari Gorman picked off a pass from Jameis Winston on the next play, and Florida cashed in on the turnover when Austin Hardin kicked a 52-yard field goal to put the visitors up 3-0 with 12:37 left in the first quarter.

On the third play of Florida State’s ensuing drive, Winston threw yet another interception — this one picked by the Gators’ Quincy Wilson, who made a spectacular diving, juggling catch.

Florida came away with another field goal on the ensuing possession, this one a 39-yarder by Hardin that made it 6-0 Gators with 7:25 left in the quarter.

The two picks were the 11th and 12th Winston has thrown during the first half of games this year.

Preview: Gators Looking to Send Muschamp Off With an Upset Win 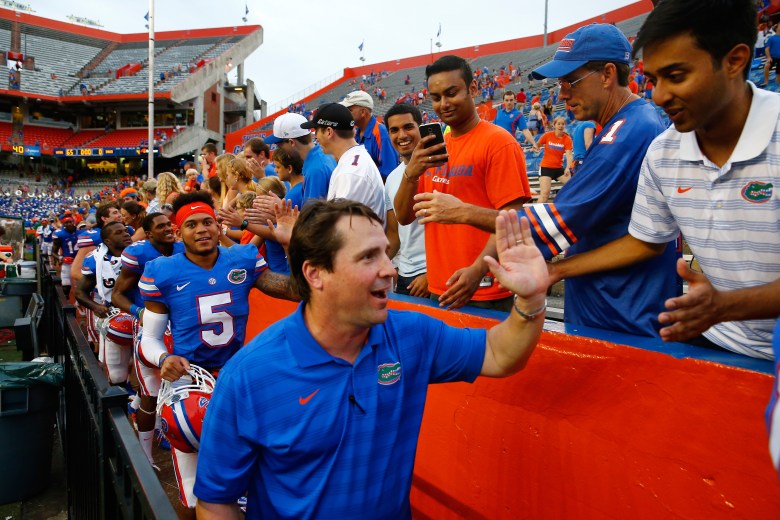 Will Muschamp’s four-year tenure has been a disaster, and the Gators announced earlier this month that the embattled coach would not return for Year No. 5 as a result.

But the Gators would love nothing more than to send Muschamp off with an upset of third-ranked Florida State in Muschamp’s last game.

The in-state rivals play Saturday afternoon in Tallahassee, with the Seminoles unbeaten but ranked just third in the College Football Playoff rankings after a series of shaky performances against inferior opponents.

Kickoff is set for 3:30 p.m. Eastern, with TV coverage on ESPN. Keep it here for live updates throughout the game. 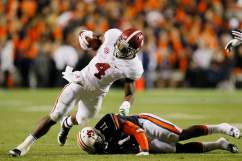 Read More
Breaking News, College Football, Football, Jameis Winston
Florida would love nothing more than to send Will Muschamp off with an upset at Florida State. Keep it here for live updates.