The Saints were primed to get back on track and avoid losing three consecutive games at home for the first time since 2005, but the Ravens did not let that happen. Behind a strong rushing attack, led by Justin Forsett who set a new career-high for rushing yards in a single game with for 182 yards on only 22 carries (8.3 yards-per-carry), the Ravens doubled up the Saints in the second half (20-10), overcoming a 17-14 halftime lead to win the game 34-27.

Drew Brees finished the game 35-for-45 with 420 yards and three touchdowns, but a crucial third-quarter interception, returned for a touchdown by Ravens safety Will Hill, turned the complexion of the game. Only Blake Bortles (Jaguars) and Austin Davis (Rams) have thrown more interception touchdowns this season than Brees.

Early in the fourth-quarter, Ravens LB Terell Suggs reached the 100-sack milestone, becoming only the 31st player in NFL history to do so since sacks first became a recorded-stat in 1982.

The Ravens are now 7-4, in a three-way tie for second place in the AFC North behind the Bengals. The Saints, now 4-7, amazingly, are still tied for first place in the NFC South with the Falcons.

The Ravens and Saints traded fourth-quarter field goals, a 55-yard FG by Justin Tucker and a 34-yard FG by Shayne Graham, which made the game 27-20 with 6:33 to go.

Like the Ravens did all night, they ran against the Saints front seven. Forsett capped an 80-yard drive with his second touchdown of the night, which gave the Ravens a 34-20 lead with 2:53 remaining in the fourth quarter.

The Saints answered back quickly with an 80-yard drive in just 2:13 that ended with Graham’s second TD to pull the Saints with seven at 34-27 with :40 remaining. However, the Saints failed in their subsequent attempt to recover an onside kick.

Ravens Stormed Out and Took 2nd Half Lead

The Ravens ate up more than half of the third-quarter clock (6:30) on their first drive of the second-half. After marching 67 yards on 13 plays, they settled for a Justin Tucker 31-yard field goal to tie the game 17-17.

Almost four minutes later, Ravens safety Will Hill intercepted a Brees pass and returned it 44 yards for a touchdown to give the Ravens a 24-17 lead.

The Saints outgained the Ravens in total yards 335-266 in the first-half.

After driving 78 yards on six plays, the Ravens were getting ready to take their second lead of the game. Fullback Kyle Juszczyk was originally ruled down on the field, but the play was reviewed and replay revealed that the ball was coming out before Juszczyk was down. The Saints could not take advantage and punted.

The Ravens only needed four plays to go 69 yards in 2:05 and re-take the lead.

Saints TE Jimmy Graham caught a TD pass from Brees with 3:20 remaining in the first quarter to tie the game at 7-7. It was Graham’s 8th TD this season.

Steve Smith Hauled in TD to give Ravens the First Lead

The Ravens answered the Saints opening drive by starting from the 3-yard line and went 97 yards for a touchdown.

Justin Forsett’s first carry went right up the middle of the Saints D for 38 yards.

Joe Flacco found Steve Smith to put the Ravens up 7-0. The score was Smith’s 5th this season.

The Saints got off to a fast start when wide receiver Josh Morgan took a reverse 67 yards that set up a first-and-goal situation.

After a failed 1st down run, the Saints tried Ingram again on second down who had looked like he fumbled. The play was reviewed and it was determined that Ingram was down-by-contact, extending the drive.

A false start penalty sent the Saints back five yards. Drew Brees scrambled on third down for five yards, setting up fourth-down on the 1. For the third time, Ingram received the carry, but the interior of the Ravens D held up and completed their early goal-line stand.

Surprisingly, both teams still have plausible playoff expectations despite their flipped records. The Ravens (6-4), currently last place in the AFC North, can still win the division and are within 1.5 games of the three teams in front of them – the Bengals (7-3-1), Steelers (7-4) and Browns (7-4). The Ravens are also still Wild Card contenders. The Saints (4-6), surprisingly, currently lead the NFC South, and with a win, would take sole possession of first place over the 4-7 Atlanta Falcons. The Saints, barring some luck, are probably not Wild Card contenders due to the Lions, 49ers, Seahawks and Eagles all currently at 7-4 with better conference records.

The Saints are usually tough to play in the Superdome, but have dropped their last two home games to the 49ers and Cincinnati Bengals. Before this season, the last time the Saints lost a home game with head coach Sean Payton roaming the sidelines was 2010. Despite these two losses, Drew Brees has won 12 consecutive prime-time home games.

The game’s key match-up will be how effective Brees is against a Ravens’ pass defense that ranks 11th in the NFL in passing yards per game. The Saints lost rookie wide receiver Brandin Cooks for the season (thumb surgery), while the Ravens have been playing without top cornerback Jimmy Smith, also out for the season (foot). 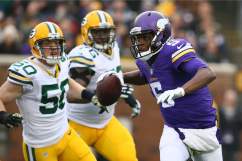