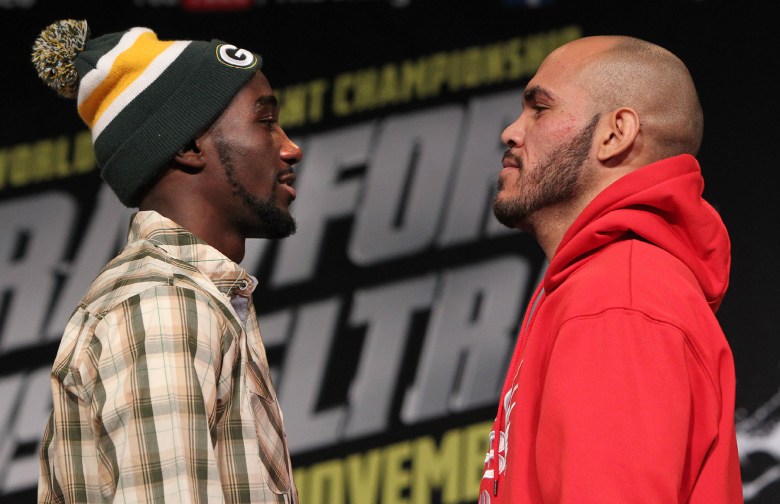 This Saturday, HBO’s Boxing After Dark travels to Omaha, where Nebraska’s-own Terence Crawford defends his WBO lightweight title against Mexican Raymundo Beltran. The fight is scheduled for 10 p.m. on HBO.

This classic stylistic matchup brings together two of today’s hungriest warriors and promises to be a fistic delight for all fans.

Here is what you need to know for the weekend’s main event:

1. Raymundo Beltran Was Robbed of the Title Currently Held by Terence Crawford 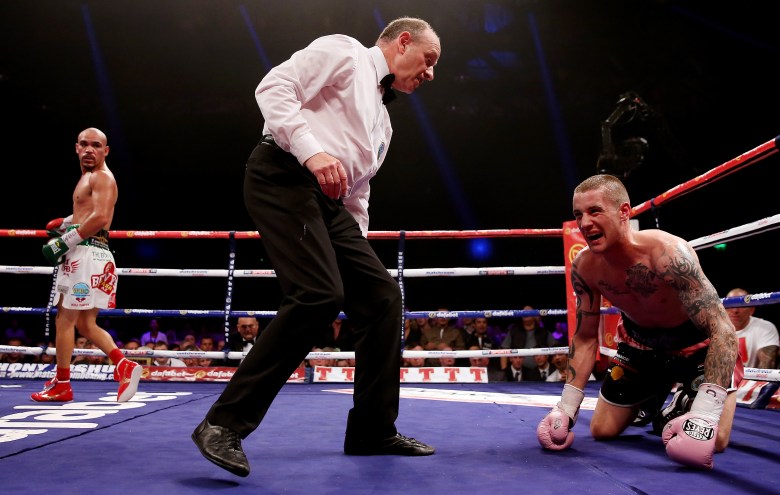 Ricky Burns after being knocked down by Raymundo Beltran (Getty)

In September 2013 Raymundo Beltran, born in Mexico but residing in North Hollywood, travelled to Glasgow, Scotland to challenge Scotsman Ricky Burns for his WBO lightweight title.

Hometown favorite Burns looked strong for the first three rounds of the bout, but his gameness was abruptly snuffed out after Beltran (now 29-6-1, 17 KOs) shattered Burns’s jaw and the champ was forced to finish the fight in excruciating pain.

Despite Beltran dominating Burns for the remainder of the bout, even knocking him down in the eighth round, homegrown judging gifted the native son with a controversial draw, allowing him to keep his belt.  Beltran did not mince words in his post-fight interview.

”Politics, always the same thing in boxing,” he said to Sky Sports. “There is money involved, it is business, every time they have a chance to protect their investment they do it. They play with the business, they have the power.

“If I got beat I got beat, I’ve been getting robbed every time. It is just so frustrating, there is so much sacrifice. We put ourselves on the line. But it is business.”

2. Terence Crawford Finished What Beltran Could Not in Glasgow 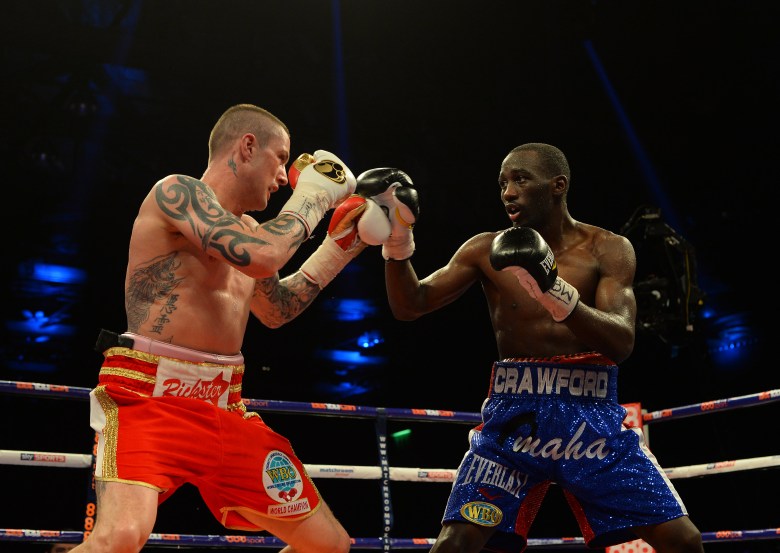 Terence “Bud” Crawford (24-0, 17 KOs) made his own trip to Glasgow in March 2014 as the challenger in Ricky Burns’s return to the ring after Beltran shattered the Brit’s jaw.

Sporting a titanium plate in his jawbone and seemingly recovered from his career-threatening injury, Burns pressed the action in the early rounds of the fight, not showing any mental affects from the trauma.

But again the Brit’s efforts were thwarted as Crawford made progress in the fourth round, backing Burns against the ropes, and making him shell up and disengage, no doubt conjuring up memories of his previous fight. Crawford took control and prevailed for the rest of the 12-rounder.

This time the judges got it right, awarding Terrence Crawford with a unanimous decision upset and the WBO lightweight title. “Bud” may have left the States as an unknown-known boxer, but returned as a champion and a star.

3. Crawford is Coming Off A Spectacular KO Win Over Yuriorkis 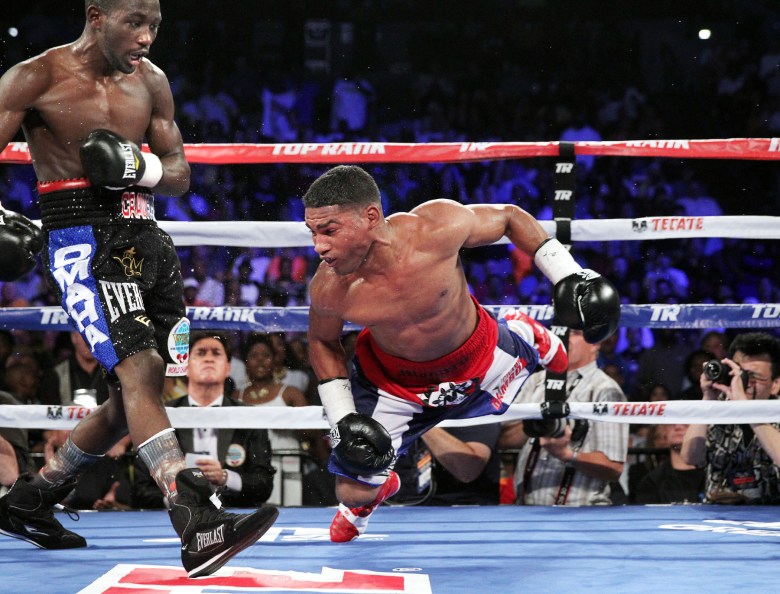 Gamboa Crawford turned his first defense, against undefeated Cuban sensation Yuriorkis Gamboa, into a sort of homecoming by staging it at the CenturyLink Center in his native Omaha, Nebraska. “The Gate City” had not seen a championship fight since 1972 when Joe Frazier had defended his title against Ron Stander; excitement on the June 28th fight-night was at fever pitch.

Gamboa immediately seized control of the bout, using his power to put Crawford on his back foot and confounding him with his rhythm and hand speed. But Crawford kept his composure, trying to find his timing as he took his medicine for the first four rounds. Then something clicked.

“I felt like I could make an adjustment with my jab, because he’s always dropping his left hand,“ Crawford told Max Kellerman of HBO sports. “I thought I could get him with my jab in the southpaw stance.”

The adjustments worked. Crawford dropped Gamboa in the fifth round and from then on took control of the fight. From his new stance, Bud’s jabs and right hand hooks repeatedly found a home on Gamboa’s face and made the Olympic gold medalist look ordinary.

Crawford knocked down Gamboa three more times before the fight was halted in the ninth round.

With the stage set for Saturday’s clash, Ray Beltran wants what’s his, and he is coming to get it.

“Crawford has shown to be a talented fighter and is someone I respect,” said Beltran at a recent press conference. “But I see this fight as an opportunity for me to achieve the recognition in the boxing world and the public’s eye.  This is my moment.”

4. Styles Make Fights: The Puncher/Boxer vs. The Pressure Fighter 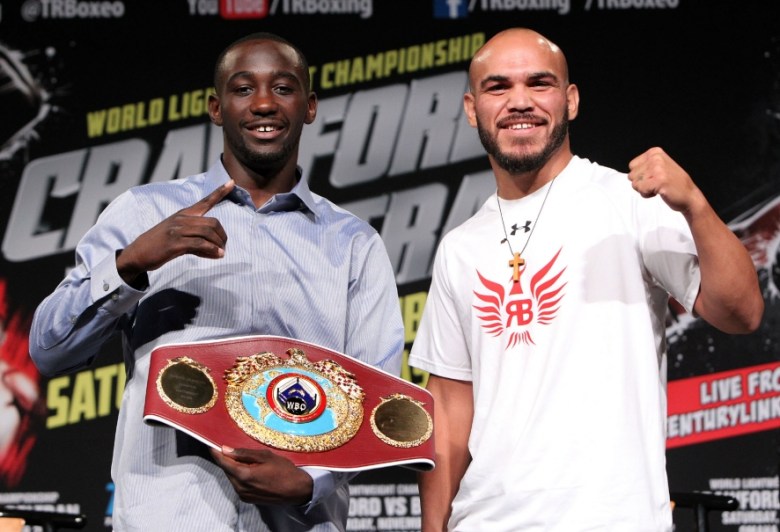 Crawford is a long-limbed boxer/puncher with a jab-centric style and excellent athletic skills. He comes to the sport with deep amateur experience and brings a fundamentally sound game.

Crawford, a strategic boxer with excellent foot speed and ring generalship, is equally comfortable fighting from an orthodox or southpaw stance. He controls the distance well and comes to the ring equipped with a complete skill set; able to lead, counter, trade shots, or straight-out brawl.

Raymundo Beltran, 33, is an experienced, thick-necked workingman-style pressure fighter, built and willing to take punches. Always moving forward and favoring to dispense from the inside, he is fully committed to his left hook and limits his right hand as a lead and to parry incoming artillery.

Beltran can throw his vicious hook from a variety of angles to both the body and the head. He is a proficient counter-puncher with good timing and hand speed, and is willing to take two or three punches to land one of his own.  He has decent mobility and cuts off the ring effectively, using his jabs to pressure his opponent against the ropes where he can unload from close quarters.

Raymundo’s lack of head movement gives his opponents a stationary target and he sometimes eats more punches than he should as he bores down on his opponent like a killer robot. But he makes up for the defensive deficiencies with a strong will and an iron heart. 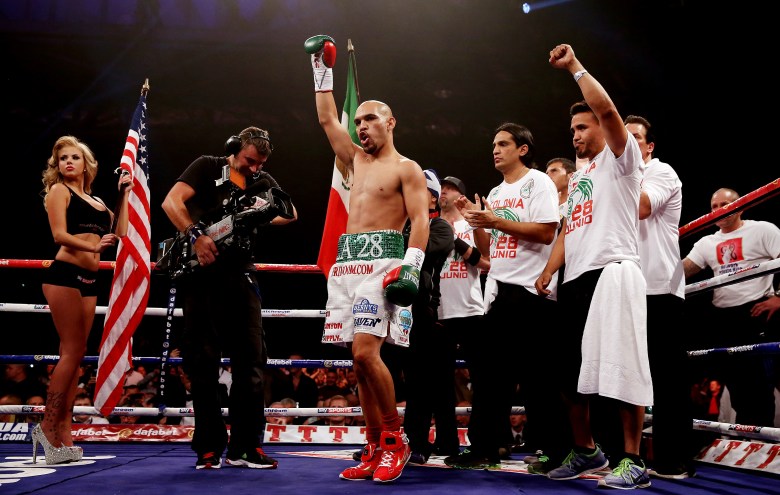 If Crawford is to remain undefeated he will have to disarm Beltran’s charges by keeping him at bay with his long reach and lateral movement. Beltran moves best in a straight line; by circling him, Crawford forces him to reset and upsets the Mexican’s tempo.

Crawford should try to come out strong and make a statement early in the fight, as Beltran usually takes a couple of rounds to warm up. Throughout the fight he should work his jab, doubling and tripling it up to keep Beltran outside and disrupt his rhythm. He must keep his distance at all times and be careful not to be drawn into the brawler’s fight.

Beltran is an excellent counter-puncher. So when getting off first, Crawford should be quick to use his foot-speed and upper body movement to avoid counters.

Raymundo should also activate his waist and head to avoid giving Crawford an immobile target to land his laser jabs, and should use his right hand to parry and catch incoming punches and prepare counters.

This fight presents a crossroad for Raymundo Beltran. A win would grant him the title he originally deserved and would put him at the top of the sport. But this could also be his last chance, and a loss to Crawford may relegate him to a gate-keeper role for the rest of his career.  It is up to him to impose his will on his opponent and not give Crawford a chance to catch his breath.

For Terrance Crawford, this will likely be his last fight at 135 pounds before moving up to junior welterweight where he can put his virtuosic brand of boxing up against the likes of Lucas Matthyse, Lamont Peterson, and Ruslan Provodikov.  But first he has to get passed the match in front of him.

“This fight is Champion vs. Champion,” Beltran said. “It’s not about the belts. It’s about us. Crawford is talented, has skill, but I have the ability to adapt and will be ready for what he brings.”

Also on the card that night: Evgeny Gradovich vs Jayson Velez.