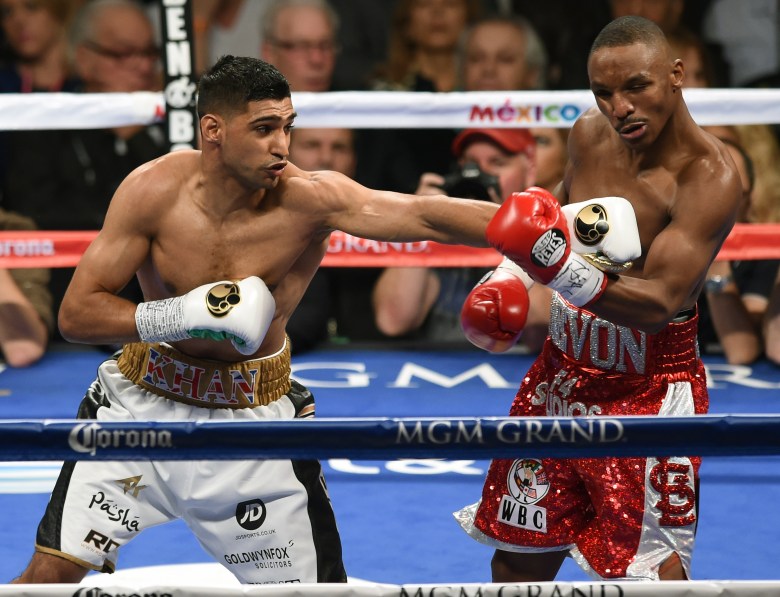 Amir Khan defeated Devon Alexander by a lop-sided unanimous decision to top off Showtime’s quadruple-header on Saturday night at the MGM Grand in Las Vegas.

Working off his back foot for the majority of the bout, “King” Khan (30-3, 19 KOs) put on an impressive display of boxing bravado against a futile Devon Alexander (26-3, 14 KOs) on his way to a dominating win.

While Alexander did his best to bring the fight to Khan, he was unable to bridge to the distance and land his punches, and ultimately had no answers to the 2004 Olympic silver medalist’s hand-speed and mobility.

Khan was able to piece together 12 rounds of near-perfect boxing; landing jabs, hooks, and blistering combinations; avoiding counters; and controlling the action from the starting bell, to the final round. His defense was sound and his questionable chin withstood the few hard punches he took.

“We knew we had to make a statement at 147 pounds,” Khan said after the fight. “I was up against a very skilled fighter and I knew we couldn’t make any mistakes. I’m the best boxer with the quickest hands in the world and I think this was one of my best performances.

“I’m getting better as I’m getting older. I have the best jab in the business and my speed causes a lot of problems for guys.”

This is Khan’s fourth win in a row since back-to-back defeats at the hands of Lamont Peterson and Danny Garcia. Alexander was expected to be Khan’s toughest challenge since the losses, but Khan was able to handily pick apart the Missouri southpaw.

This was Devon Alexander’s second defeat in three fights, coming on the heels of a win over Jesus Soto Karass in a competitive 10-rounder in June, and after dropping a decision to Shawn Porter one year ago.

Although Alexander showed some sparks against Amir Khan in the fifth, sixth, and eighth rounds, the effort was not enough to impress the judges who handed him a 119-109, 118-110, and 120-108 near-shutout loss.

“He was the better man tonight,” Alexander said post-fight. “My coach told me to get off and I wasn’t getting off. I could have caught him I just didn’t do it tonight. I was supposed to follow the game plan, I was moving good but I just couldn’t move forward and get off.”

Saturday’s win keeps the 28-year-old Khan in contention and brings the Bolton man one step closer to his coveted matchup with Floyd Mayweather Jr, which he has been enthusiastically pursuing for years.

“I really believe I earned my shot against the best fighter in the world, which is Floyd Mayweather,” Khan said. “I believe he’ll have problems with my speed, movement and accuracy. I’m going to leave it to my team and let’s hope we get that fight.”

Other options for Khan now include a meeting with fellow-Brit and current IBF welterweight title holder Kell Brooks, and possible rematches against Danny Garcia or Breidis Prescott, who handed Khan a devastating first-round knockout in 2008.

For Alexander, 27 years old, the loss will likely mean a rebuilding period before he will get another shot at a top-level fighter or a chance at a title.

With his victory, Khan retains his WBC Silver welterweight title, which he lifted from Luis Collazo in May. 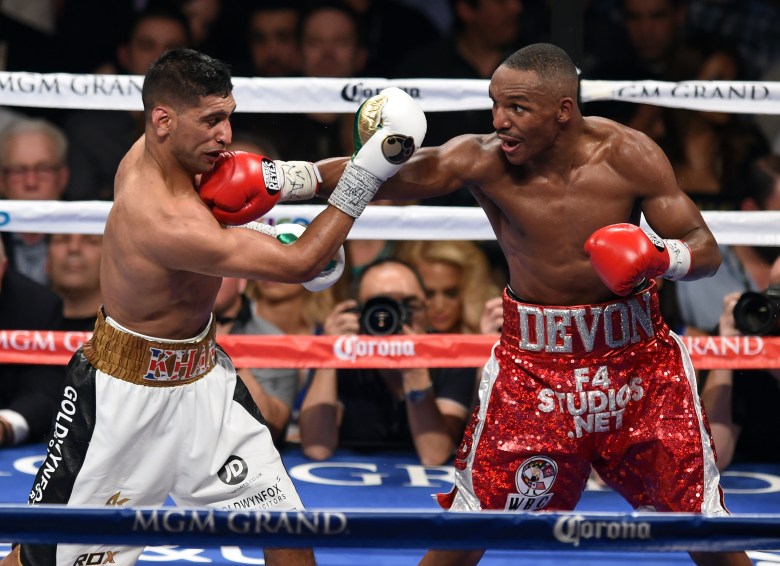 Live updates (scores are not official):

Round 1: Alexander wears red trunks and fights out of a southpaw stance. Khan wears white trunks. The fighters meet in the middle of the ring, testing each other. Alexander throwing jabs, Khan charges. Left hook from Khan lands. One minute in, Alexander is rocked by a combination. Halfway into the first round, a clinch is broken up and Alexander lands a jab. Khan flurries, is shut down by an Alexander clinch. Minute left in the round. Khan charges with combination, does not land. Both fighters keeping their distance. Straight left lands for Alexander. 10-9 Kahn

Round 2: Khan pumping his jab, backs Devon up. Khan is trying to get inside, but Devon is not letting him. Right hand from Kahn. Minute in to the round, Khan lands right hand. Left and right from Khan. Jab to the body from Khan, lands three-punch combination with a minute left. 1-2 from Khan. Left hook hurts Alexander, Khan is well in control. 20-18 Khan

Round 3: Khan comes out throwing and pushes Alexander back. Alexander is using his jab more to keep Khan at bay. But King Khan keeps finding the openings. One minute in, the fighters are vying for position in the middle of the ring. Left hook from Khan over Devon’s right hand. Trading combinations in the middle of ring, ref tells them to stop yapping. A tactical round. 30-27 Khan

Round 4: Left hook from Khan lands. And another. More of the tactical, both men looking for openings. Punctuated by flurries from Khan. Minute left in the round, Khan flurries and lands. 1-2 from Khan. Alexander lands left. Trading punches to finish off the round, but Khan gets upper hand. 40-36 Khan

Round 5: Khan opens with the double jab. They exchange jabs in the center of the ring. Minute into the round, right hand from Khan lands. Alexander answers with left. Alexander lands another left hand. Good back and forth. Minute left, five-punch combination from Khan. Alexander is trying to counter, but Khan is too fast. Big right from Khan. Closer round. 50-45 Khan

Round 7: Second half of the fight. Alexander pressing, lands jab between the guard. Khan flurries and lands well. Minute left, Khan moving back but still landing. Jab from Khan. Combo from Khan is answered by same from Alexander. Three lefts from Khan in a row. Alexander lands to the body. 70-63 Khan

Round 8: Both fighters trading jabs while circling. Hard jab from Khan. Khan boxing well and relaxed, while Alexander’s jab is ineffective. Big right hand from Khan. Minute left in the round, left hand from Alexander catches Khan.  Khan takes it well. Big right to the body from Khan. 80-72 Khan

Round 9: Khan triples up on the jab. Alexander is pushed back by left-right combo. Minute in to the round, Khan lands with quick combos, followed by body shot from Alexander. Khan working the jab, left from Alexander lands. Alexander trying to land right, but can’t bridge the gap. 90-81 Khan

Round 11: The championship rounds. Khan opens with a five-punch combination. Alexander lands with a right hook. Minute into the round, Khan is still moving backwards and landing at will. Alexander lands a straight left to the face. Minute left, Alexander is trying to loosen up, draw Khan in. But Khan won’t bite. Hook from Khan. Combination lands for Khan 110-99 Khan

Round 12: Last round. Jab, hook from Khan opens the round. Alexander tries pushing the pace, trading punches. Halfway through the round, both fighters are in the middle of the ring, Khan still landing and Alexander has little to offer. Left hook from Khan lands. Straight left from Alexander. Khan staying away in the final seconds. 120-108 Khan 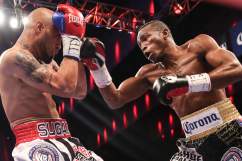