As Week 16 comes to a close, the AFC is now down to nine teams who have an opportunity to make the playoffs. The 11-3 Denver Broncos have already clinched the AFC West title and are looking to secure a 1st-round bye in the playoffs when they visit Cincinnati to take on the 9-4-1 Bengals who have yet to secure a division title, let alone a playoff berth.

The Broncos are coming off a 22-10 win against the Chargers, the Bengals a 30-0 shellacking of the Browns in Cleveland.

Click here for Heavy’s live updates throughout the game tonight.

Who:
Broncos vs. Bengals

The Broncos still have a shot at home-field advantage throughout the AFC playoffs, but that would require New England to slip up in their finale next week against the Buffalo Bills. Denver would have to win this game and next week’s finale against the Oakland Raiders.

The most important statistic in this game is that Peyton Manning in his career against the Bengals is 8-0, including 3-0 against them in the month of December. Manning is also excellent against teams that he is clearly favored against in prime-time games. His overall record in games on Monday Night Football is 13-4, and he has a 36-16 TD-INT ratio in those games — more than a full season’s sample size.

The Broncos have adapted this season without Knowshon Moreno and Monte Ball for large stretches, rushing for over 1,500 yards as a team, which includes the team’s leading rusher C.J. Anderson with 679 yards on 4.6 yards-per-carry.

Next week Cincinnati will travel to the big ketchup bottle to take on the Steelers in a winner-take-all AFC north showdown, so while this game isn’t necessarily do-or-die, it’s still important for the Bengals, especially for playoff seeding purposes. If the Bengals win out, they can grab the AFC’s No. 3 seed by virtue of a better winning percentage than the Colts even though they lost the head-to-head game vs. Andrew Luck this season.

The problem is — the 2nd most important statistic in this game — Andy Dalton is 0-for-billion in big, prime-time games.

Dalton at 1 p.m. on a Sunday afternoon? Efficient, a 60% thrower, lock for 250 yards and at least a touchdown, if not two. In prime-time games, although it’s a semi-small sample size because this is Dalton’s 4th year as a pro, it’s not good. Between the New England and Cleveland games this season where the Bengals were blown out in each, Dalton must prove that he can lead the Bengals to a big win in a big situation/moment.

The Bengals will also need to get something out of that efficient running game — rookie Jeremy Hill (LSU) and 2nd-year back Gio Bernard (North Carolina) have combined for over 1,500 yards on the ground at just under 5 yards-per-carry.

Eventually Dalton is going to have an efficient game in a big spot. The Broncos defense has quietly been “shaky” all season, and they haven’t looked like a dominant “team” in about a month-and-a-half. The Bengals play well at home, and that will be enough to keep them in the game.

In the end, Peyton is Peyton on Monday Night Football. He won’t play perfectly, and he’ll probably turn it over once as he’s been prone to the interception lately, but the overall balance of the Broncos is enough to keep them alive for home-field. The Bengals game next week may very well end up being for the right just to get into the dance as opposed to just a division. 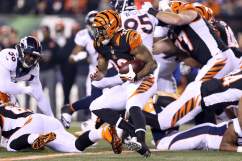