For the first time since 1964, the “Egg Bowl” Game between Mississippi State and Ole Miss was televised, and it lived up to its billing. After a disappointing 2nd half to the season, the Rebels upset the nation’s No. 4 ranked team, which sent Alabama into the SEC Championship Game and effectively eliminated the Bulldogs from college football’s playoff race.

The team that benefited from the Bulldogs loss was TCU, who with a dominating 48-10 road win against Texas in Austin, control their own destiny next week against Iowa State at home. Baylor has also benefited, and with a dominating victory against Kansas State, would prevent the Horned Frogs from winning the Big 12 Championship outright. If a co-champs scenario occurs, with the Bears holding the head-to-head victory, there may be enough momentum to vault the Bears in the final rankings over TCU — who vaulted ahead of Florida State to No. 3 in this week’s rankings.

The 12-person College Football Playoff Committee has chosen their top four for Week 15. You can see the complete rankings here.

Last Saturday, Alabama and Auburn played the highest-scoring Iron Bowl in the game’s history with the Crimson Tide coming out on top 55-44, clinching a berth in the SEC Championship Game against No. 16 ranked Missouri. With a win, Bama will own the No. 1 rank in the first season of the playoff rankings.

Amari Cooper was unreal last week catching 13 passes for 224 yards and 3 TDs, and T.J. Yeldon put in a great performance right behind him with 19 carries for 127 yards and 2 TDs. The Crimson Tide’s offense is finally realizing its explosive potential under Lane Kiffin, gelling at the right time.

The Ducks defeated the Oregon State Beavers 47-19 in the latest installment of the “Civil War” to move to 11-1 and play No. 7 Arizona for the Pac-12 Championship on Saturday.

Marcus Mariota is the front-runner for the Heisman Trophy, but the one team he hasn’t quite figured out is the Wildcats. With two losses, and three of his 12 career interceptions (25%) coming against Zona, there will be some pressure for him to definitively lead Oregon to a win in this game, and his first Pac-12 Championship.

The two biggest knocks against TCU are that they’ll end up playing one less game than Florida State and Ohio State and that they lost head-to-head against Baylor, but for now, they’re a surprising No. 3. In 2006, Florida vaulted No. 2 Michigan at the end due to their SEC Championship victory. If Ohio State defeats Wisconsin by at least two scores, the committee will have a tough time leaving the Buckeyes out in favor of the Horned Frogs.

Kirk Herbstreit on TCU.."I just think they're a better team".

“Another week, another questionable performance. Last year’s Heisman Trophy winner Jameis Winston and the Florida State Seminoles struggled at home last week to a tough Bost…” That was written last week after the Seminoles and Winston struggled against the Golden Eagles. New opponent, same result; Winston threw three first-quarter interceptions against Florida, but still managed to squeak their way to a 24-19 win against the Gators.

Florida State plays No. 11 ranked Georgia Tech this week for the ACC Championship. The Seminoles are on high “upset alert,” and with a loss, due to their questionably poor play, would probably drop out of the playoff altogether even with their 1st loss in over two seasons.

On the Outside Looking In

Ohio State lost quarterback J.T. Barrett for the season during Saturday’s game against Michigan. The Buckeyes have the benefit of playing the Big 10 Championship Game against Wisconsin, but a close win may not be enough to make them standout in comparison to TCU and Baylor. A blowout win means that the voters would overlook Barrett’s injury and place them at No. 4.

A victory against Wisconsin would give the Buckeyes victories over Michigan State, Minnesota and Wisconsin, a stronger trio than TCU’s or Baylor’s.

While TCU blew out Texas, Baylor barely beat Texas Tech — this was also due to a Bryce Petty head injury (concussion), his second of the season, that knocked him out in the 3rd quarter, making his status “questionable” for this week’s game against Kansas State, although he looks like he’ll play. If Petty doesn’t play, Baylor would need to blowout the Wildcats to impress voters enough to consider them for the No. 4 spot.

Week 15’s Top-25 rankings are the penultimate rankings for the 2014 season. Week 16’s final rankings will be released on Sunday, Dec. 7. 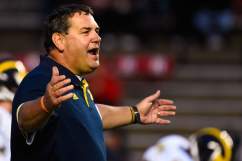