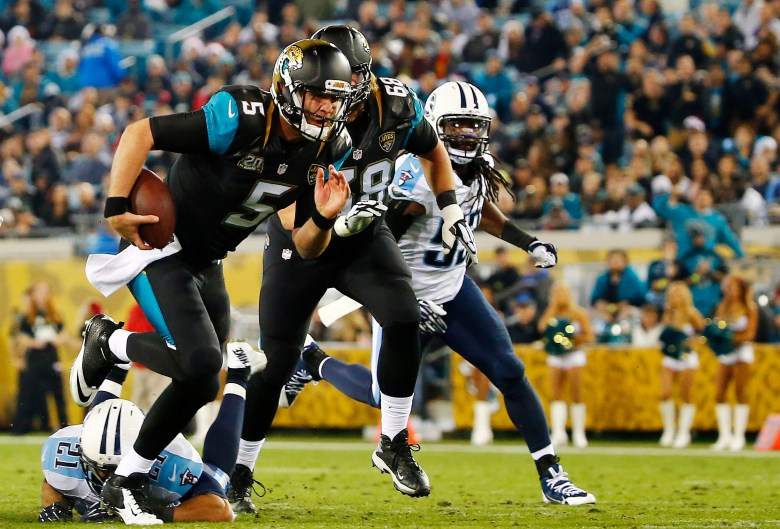 The Jacksonville Jaguars defeated the Tennessee Titans 21-13 on Thursday Night Football. The Jags improved to 3-12, a small consolation. The Titans dropped to 2-13, and are one step closer to securing a top three pick in next May’s NFL Draft.

Blake Bortles had an “alright” game only finishing 13-for-26 for 115 yards and a touchdown, but he made plays when he needed to and the offense hung in the game long enough to score on a few drives. Bortles’ counterpart played well; Charlie Whitehurst finished 24-for-35 for 287 yards and a touchdown and led a desperation two-minute drive effort in the waning seconds that came up short. The Jaguars also rushed for a season high 177 yards against the league’s worst ranked run-defense unit.

In the game’s most interesting statistic: Sen’Derrick Marks sacked Whitehurst on the final play of the game to activate a $600,000 incentive clause in his contract — he’s a happy man tonight.

The Titans will close their season hosting the Colts while the Jaguars will travel to Houston to play the Texans.

Jordan Todman Breaks it Open in the 4th Quarter

The Jaguars’ longest running play of the season, which was also their longest run since Rashad Jennings’ 74-yard run in 2010 against Oakland, came on a 62-yard run to the house by Jordan Todman to give Jacksonville a 21-10 lead with 9:13 remaining in the 4th quarter.

Jacksonville has scored touchdowns on back-to-back drives that bookended the half. On their 1st possession of the 2nd half, the Jaguars went on an 11-play, 72-yard drive taking 5:33 off the clock, capped off with a Toby Gerhart 1-yard TD run that gave them a 14-10 lead — their first of the game.

The Jaguars Finally Got Their Offense Going into Halftime 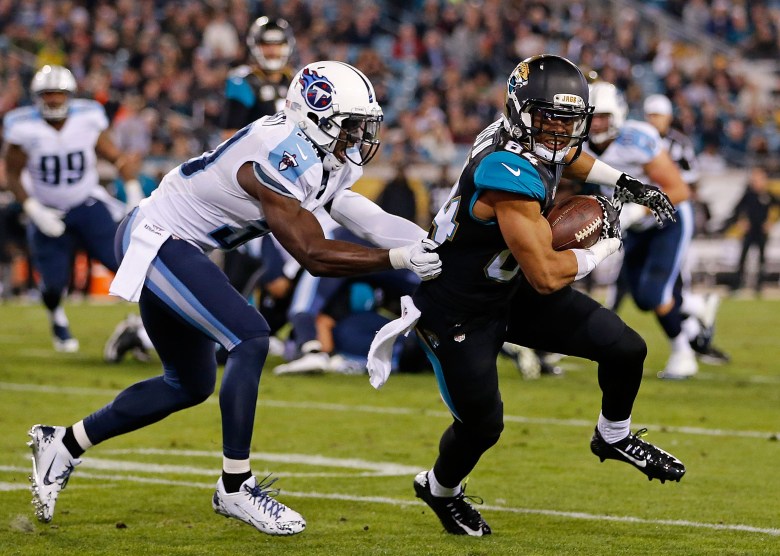 Bortles and the Jaguars offense struggled for a majority of the half trying to move the ball. Late in the 2nd quarter, the offense was finally able to put together a long drive covering 80 yards on 11 plays in 3:15, capped off with a Mercedes Lewis 4-yard touchdown catch to make it a 10-7 game going into halftime.

Bortles is just 9-for-15 for 52 yards and a touchdown, but he finally looked comfortable in the pocket.

“Clipboard Jesus” Charlie Whitehurst making just his 8th career NFL start in his 9th season is impressing. He went 11-for-16 for 142 yards and a touchdown in the opening half, and put together multiple drives that moved the Titans offense. The titans have out-gained the Jaguars on offense with 178 total yards to 91.

The Jaguars received the 2nd-half kickoff.

Tennessee Ended a Long Drought on the Game’s First Possession

Leon Washington's 8-yard TD snapped a streak of 25 straight drives without an offensive touchdown for the Titans.

Charlie Whitehurst marched the Titans 84 yards on 12 plays capped off by a Leon Washington 8-yard touchdown pass to give the Titans a 7-0 lead.

The Jacksonville Jaguars and Tennessee Titans are both 2-12, and are two of the worst teams in the NFL. Both of these teams will most likely be picking in the top five in the 2015 NFL Draft, so this game has huge implications for the top of next year’s draft board.

The Titans are coming off a Week 15 loss New York Jets where they only scored 11 points (three field goals and a safety). Even worse, both Jake Locker and Zach Mettenberger are hurt, which means the team will be starting Charlie Whitehurst. Whitehurst has been serviceable in limited playing time this year.

The Jaguars, on the other hand, don’t necessarily have a quarterback problem at the moment, but have dealt with that problem in a different way. 2014 1st-round pick Blake Bortles hasn’t impressed a whole lot in his 11 starts since replacing Opening Day starter Chad Henne – he’s thrown just eight touchdowns to 15 interceptions and owns a 70.6 quarterback rating, which is the second worst in the NFL – but underneath those bad stats probably lays a more athletic, middle-class version of Ben Roethlisberger. He sprained his knee in Week 15’s 20-12 loss to Baltimore, but will most likely try and play through the injury.

The last time these two teams met, Bortles threw for a season-high 336 yards and a touchdown; his best performance as a pro. The Titans blocked a 55-yard field goal attempt with :12 seconds remaining and held on for a 16-14 victory at home. Despite his struggles, Bortles seems like the type of passer who will make adjustments and improve with experience and with head coach Gus Bradley, the Jaguars seem like they could be on the rise within two years. The Titans don’t have much on either side of the ball, so these last two games will be a good test as to just which young players will stick around for 2015. 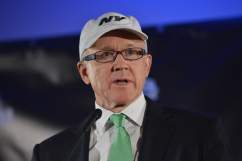