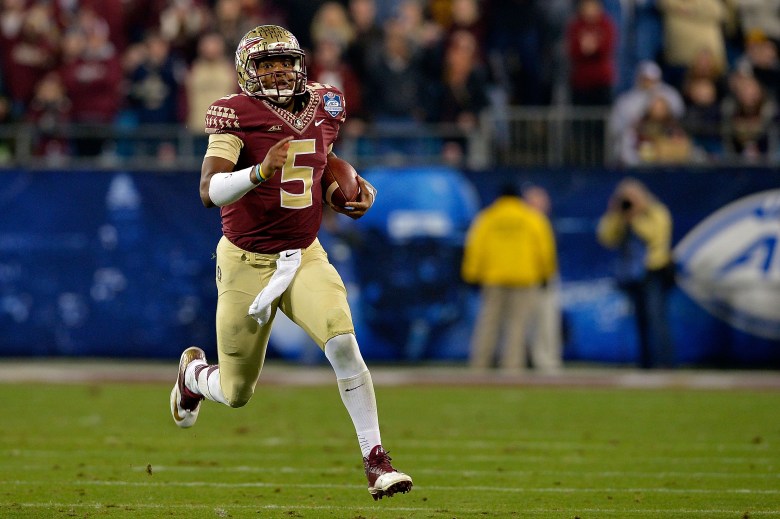 Jameis Winston is undefeated in his Florida State career. (Getty)

For only the third time in college football history, two Heisman Trophy winners will face each other in a game. And what a big game it is.

The veteran signal-callers play in vastly different offenses, but both piled up the numbers.

Here’s the rundown on Winston and Mariota:

Winston took a small step back this season after putting up 40 touchdowns vs. 10 interceptions in his Heisman-winning 2013. He did throw for 27 scores in 2014, but his INT total rose to 17. Winston lost his 2 top receiving targets (Kelvin Benjamin and Kenny Shaw) and the No. 1 rusher (Devonta Freeman) from last year’s National Championship team, so that had to factor in. And it’s hard to imagine his rather lengthy list of off-the-field problems didn’t get into his head at least a little, though that can’t be proven.

Winston and Florida State got a reputation for being slow starters, but turning it on when they needed to. Either way, FSU did in fact turn it on as the Seminoles are undefeated again. In fact, Winston hasn’t lost since he’s stepped foot in Tallahassee. The guy just wins.

Weaknesses: Needs to improve pocket passing; Runs too quickly when receivers are covered

Numbers-wise, they don’t get much better than Mariota. The 53 total touchdowns vs. 2 interceptions are head-shakingly amazing. He makes sound decisions, which turn into big plays, which become points. The Heisman winner is a perfect fit for Oregon’s offense and the 3 years of experience is a huge plus. Finding major holes in Mariota’s game is not easy.

He doesn’t have the most powerful arm, but he does have a lightning quick release and gets the ball to his receivers on time. Mariota’s weapons aren’t exactly household names and much of that has to do with his ability to spread the ball around so effectively. And his open-field running skills are way above-average for a QB.

Both Winston and Mariota are great college quarterbacks. The fact they play 2 contrasting styles in 2 different offenses makes this a tough choice.

Winston hasn’t lost in an FSU uniform and knows how to win the close games. He doesn’t get enough credit for that. Mariota has mostly been in games decided by halftime.

But here’s why Mariota is the better quarterback right now: he lost his top targets from a year and the offense actually got better in 2014 with mostly new weapons. Winston lost his big guns and he took a step back this season. Mariota makes everyone better.

You could argue it’s Oregon’s offensive system that helps Mariota. And it does a bit (but, really, what coach puts a QB in a system he will fail in?). But let’s not forget a lot of the quarterback position is cerebral. And Mariota knows his offense better and makes better decisions than Winston does.

But we can revisit this next season, when both are playing on Sundays. 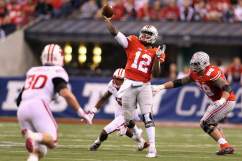