Seattle Seahawks running back Marshawn Lynch missed the start of Sunday night’s game against the Arizona Cardinals due to an upset stomach. Eventually, Lynch felt better and eventually entered the game.

not before eating his trademark Skittles snack on the sideline!

The touchdown run reminded fans of his historic run in January 2011’s playoff game against the New Orleans Saints.

Lynch ran for 113 yards on just 10 carries. Oh, and he also scored two touchdowns. Just another day in the office for #BeastMode.

And here is the entire run sped up to Eminem in the background. Enjoy 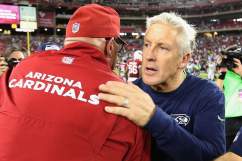