The NFL owners unanimously approved a new personal conduct policy on Wednesday that will take initial decisions on discipline out of Commissioner Roger Goodell’s hands, acknowledging that the league should defer to other more experienced professionals when it comes to handling legal matters within the organization. This is a stark change to how the policy previously operated.

The NFL will staff a disciplinary officer — one preferably with a criminal-justice background and expertise in the matter of disciplinary action as it relates to each individual player case that arises from here on out.

“This will be a highly qualified individual with a criminal justice background hired as soon as possible for the newly created position. The person will oversee our investigations and decide the discipline for violations of the policy. The policy says appeals for discipline levied against players will continue to be processed under Article 46 of the collective bargaining agreement, meaning they’ll be heard by Goodell or his designee, though the commissioner “may name a panel that consists of independent experts to recommend a decision on the appeal.”

Goodell promised in September — and now the league has successfully acted on that promise — that the policy would be revised before the Super Bowl in direct response to widespread criticism over the NFL’s handling of the Ray Rice domestic violence case and other recent issues.

Quite a day in NFL biz.Owners approve new Conduct Policy w/continued final discipline power of Goodell, whose testimony in Rice case out.

A controversy has also developed about how the new policy applies to players — specifically, their Fifth Amendment rights as presented in the U.S. Constitution.

According to Pro Football Talk, which dissects the word-for-word specifics in the new policy:

“Because the Fifth Amendment’s protection against self-incrimination does not apply in a workplace investigation, the league will reserve the right to compel an employee to cooperate in its investigations even when the employee is the target of a pending law enforcement investigation or proceeding,” the new policy states. “An employee’s refusal to speak to a league investigator under such circumstances will not preclude an investigation from proceeding or discipline from being imposed.”

Because of it’s application as it relates to federal law — the NFL is an independent, separate enterprise — the NFL Player’s Association has a legitimate grievance because now they will be forced to cooperate, a slight infringement on their personal rights. In response to the change’s the NFLPA released a statement:

The NFLPA may end up challenging the league’s new PCP, but probably not until the offseason. 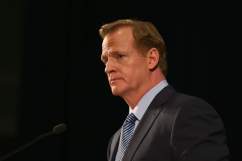 What Did Roger Goodell Announce at His Press Conference?