Former St. Louis Post-Dispatch columnist Bryan Burwell’s passing on December 4, 2014, left a sizable hole in the sports world. Here are some tweets from prominent people in the sports industry throughout the day:

If you never knew Bryan Burwell..let the great @miklasz tell you we lost today. Still in shock http://t.co/BUFIzcddsP

Terrific tribute to a terrific man. RT @miklasz: Bernie: Bryan Burwell will always live in our hearts: http://t.co/xXFw7TaiXa via @STLtoday

Bryan Burwell has been trending nationally all day. So much sadness, but I can't help but imagine the laugh Bryan would have over that.

RIP, Bryan Burwell. Terrific writer and an even nicer person. Shocking loss, and condolences to his family.

Beyond his talent as a columnist, Bryan Burwell was one of the truest gentlemen of our profession. Man, he died way too young.

"I've never worked with a better guy." @miklasz shares his thoughts on the loss of Bryan Burwell. http://t.co/ZmIbhHfpE8

This one takes my breath away: lost a great man and columnist. RIP, Bryan Burwell. http://t.co/ODBGJWjILw

So sorry to hear about Bryan Burwell's passing. 59 is way too young. Here's a terrific 2007 interview with him: http://t.co/RTHllsOaJV

Bryan Burwell, one of the great guys and real pros in our business, gone at 59. This is so, so sad. Great admiration for the man.

Very sad to hear of the passing of Brian Burwell. Would talk to him in the media room at big Mizzou games. Was always a gentleman. RIP

Not many writers would warrant a note from Bud Selig on their passing. Bryan Burwell was that well-respected a guy: pic.twitter.com/nRhIFAqNLa

And lastly, each of the St. Louis’ three professional sports teams took to Twitter to express their condolences:

Rest in peace Bryan Burwell. Bryan was an important part of the fabric of St Louis and the St Louis sports scene and he will be missed.

Our thoughts & prayers go out to the family of Bryan Burwell. Our press box has lost a rare talent & person. You will be missed, Bryan.

We’re sad to learn about the passing of the Post-Dispatch’s Bryan Burwell. Our condolences go out to his family at this difficult time. 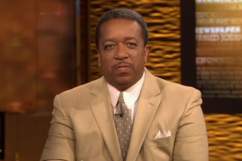