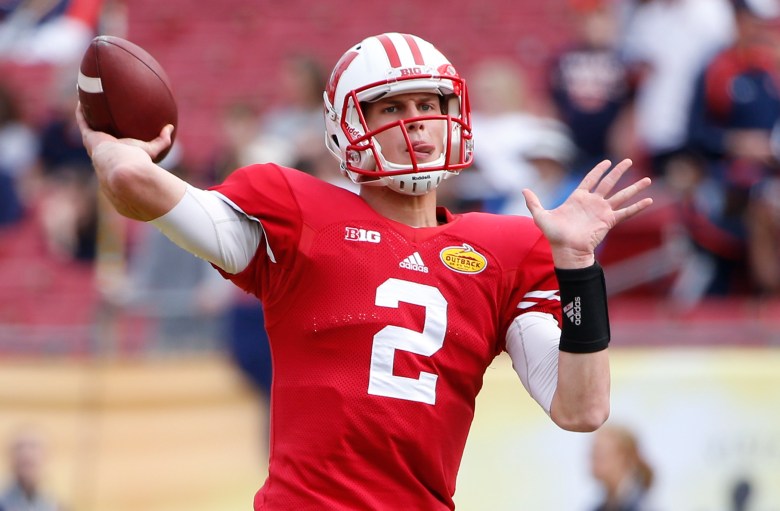 Rafael Gaglianone kicked a 25-yarder in the Badgers’ first overtime possession for the lead.

Gaglianone also hit the game-tying field goal from 29 yards out with 7 seconds left in regulation.

The win gave Barry Alvarez his first coaching victory since the 2005 Capital One Bowl. Alvarez, the Wisconsin athletics director, was on the sideline because Gary Andersen left for Oregon State and new head coach Paul Chryst hasn’t started his coaching duties yet.

Heisman Trophy runner-up Melvin Gordon ran for 251 and 3 touchdowns on 34 carries and was named the game’s MVP.

Going for it on 4th and 1, Gordon burst through the line and took it to the house for a 53-yard score (above). It gave Wisconsin a 21-17 late in the 3rd quarter.

Gordon capped a 65-yard drive with a 25-yard touchdown run on Wisconsin’s 1st drive of the 2nd half.

Gordon carried the ball 4 times for 56 yards on the drive.

Melvin Gordon with the 25-yard TD run and Wisconsin and Auburn are tied in the #OutbackBowl, 14-14. http://t.co/MOaZIfVA0x

Taking advantage of a 4th down defensive pass interference penalty in the end zone, Cameron Artis-Payne scored from 2 yards out to give Auburn a 31-28 lead with just under 3 minutes remaining.

Facing a 4th and 11 from the Wisconsin 15-yard line, Sammie Coates was interfered with in the end zone, giving Auburn the ball at the Badgers’ 1.

Auburn Regained The Lead Early in The 4th Quarter

Minutes after Gordon’s 53-yard run gave Wisconsin the lead, Nick Marshall hit C.J. Uzomah for a 20-yard scoring strike to put Auburn back up 24-21 early in the 4th quarter.

Artis-Payne ran 4 times for 31 yards from the drive that started at the Tigers’ own 19-yard line.

Artis-Payne finished with 126 yards on 26 carries.

Auburn Forced a Turnover, Then Scored on a 66-Yard TD Pass

Marshall connected with Ricardo Lewis on a 66-yard touchdown to give Auburn a 14-7 lead midway through the 2nd quarter, 2 plays after the first turnover of the game.

Trovon Reed intercepted a Tanner McEvoy pass at the Tigers’ 33-yard line seconds earlier to give Auburn the ball.

Auburn Tied The Score Late in The 1st Quarter

Artis-Payne scored on a 2-yard plunge to tie the game 7-7 with a little over 2 minutes left in the 1st quarter. It was Artis-Payne’s 12 rushing TD of the season.

Marshall hit Quan Bray for 19 yards to the Wisconsin 2 to set up the score.

On the ensuing drive, the Badgers lost center Dan Voltz to an injury. He was ruled out for the rest of the game.

After forcing an Auburn 3 and out to start the game, Wisconsin drove 89 yards in just 5 plays and capped it with a 7-yard touchdown pass from Joel Stave to Corey Clement.

Clement had a 43-yard run on the drive the play before his score.

Preview: Auburn And Wisconsin Kick Off New Year’s Day in The Outback Bowl

The Badgers hired Paul Chryst away from Pitt, but UW Athletics Director – and former coach – Barry Alvarez will be on the sidelines for Thursday’s Outback Bowl against Auburn (8-4).

Wisconsin is hoping to get back to its winning ways on the shoulders – or perhaps, by the legs – of FBS rushing leader Melvin Gordon, who has racked up 2,336 yards.

Auburn has a stout running game of its own, led by Cameron Artis-Payne’s 1,482 yards. Nick Marshall is a dual-threat quarterback who has added 780 the ground to go with 2,315 passing yards.

The Tigers lost their last game, a 55-44 track meet against Alabama in the Iron Bowl. 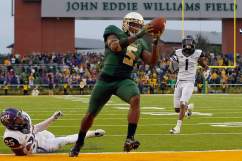