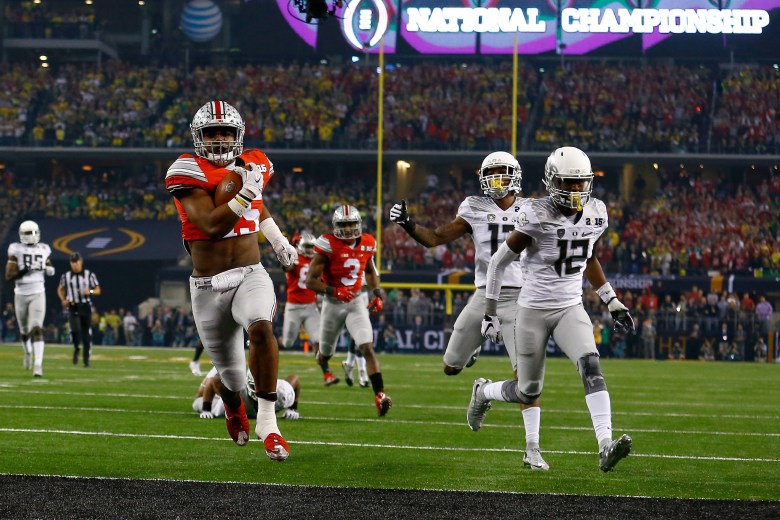 Ohio State’s Ezekiel Elliott runs for 1 of his 4 touchdowns vs. Oregon Monday night in the National Championship Game. (Getty)

Check out the final stats and complete boxscore here; a photo gallery here; and all of Heavy’s College Football Playoff coverage here. 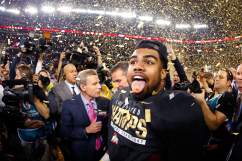 Playing in what was likely his last game at Oregon, Heisman Trophy winning quarterback Marcus Mariota completed 24 of 37 passes for 333 yards with 2 touchdowns and an interception, which came on the last play of the game.

Byron Marshall led the Ducks with 8 receptions for 169 yards.

Making his 3rd career start, Cardale Jones completed 16 of 23 passes for 242 yards with 1 touchdown and 1 INT. He also ran for 38 yards and a score.

Mariota hit Keanon Lowe for a 7-yard touchdown and a 7-0 Oregon lead not even 3 minutes into the game.

The drive covered 75 yards on 11 plays, but saw the Ducks almost lose the ball twice. Running back Thomas Tyner recovered his own fumble after a 12-yard run.

Then a fumble was called on the field after a Mariota 7-yard run, but replay overturned the call as the QB’s knee was down before the ball came out. Four plays later Mariota found Lowe for the score.

The Oregon defense then forced an Ohio State punt on the Buckeyes’ first possession.

Elliott burst through the line for a 33-yard touchdown run to tie the game at 7 with 4:36 left in the 1st quarter.

The run capped a 97-yard drive. Two plays before the score, the Buckeyes barely converted a 4th and 2 to keep the drive alive at Oregon’s 35.

Cardale Jones completed back-to-back 26-yard passes to Corey Smith and Jalin Marshall. The completion to Smith came on a 3rd and 8 from the OSU 5-yard line.

Jones connected with tight end Nick Vannett for a 1-yard score to give Ohio State a 14-7 lead late in the 1st quarter.

Ohio State used a 17-yard punt return from Marshall to the Oregon 46-yard line then took advantage of a pass interference penalty on the Ducks’ Troy Hill before the score.

On Oregon’s previous drive, Dwayne Stanford had a crucial drop on a 3rd and 12 play, setting up Marshall’s punt return.

SHORT! Ducks go for it on 4th down and Buckeyes hold. Thomas Tyner comes up shy of goal line. http://t.co/Pz20BmKO1U

With a 14-7 lead early in the 2nd quarter, Ohio State quarterback Jones fumbled in Oregon territory. Alex Balducci recovered at the Ducks’ 40.

The Ducks quickly moved down the field and were faced with a 4th and goal from the Ohio State 3. Oregon went for it and Tyner was stopped a yard short, giving the ball back to the Buckeyes.

Jones connected with Corey Smith on a 47-yard pass deep into Oregon territory, but the Buckeye receiver fumbled after a hit by Hill. The Ducks’ Rodney Hardrick recovered at the 9.

It was the second lost fumble in as many possessions for Ohio State.

But Oregon couldn’t muster any offense and went 3 and out. Ohio State got the ball back on a punt at the Ducks’ 49 with 7:05 left in the half.

Adolphus Washington sacked Marcus Mariota on 3rd and 5 to force the punt.

Jones first connected with Devin Smith on a 45-yard pass then scored on a 1-yard plunge to put the Buckeyes up 21-7 with under 5 minutes left in the 2nd quarter.

It appeared Jones had scored on a 5-yard run the play prior, but replay reversed the score when it showed the quarterback was down before the ball crossed the goal line.

The Buckeyes offense had lost fumbles on their 2 previous possessions, but the defense stepped up, stopping an Oregon 4th and goal run on one possession then forcing a punt on the next.

Mariota connected with Marshall for a 70-yard touchdown on Oregon’s first offensive play of the 2nd half to cut Ohio State’s lead to 21-17.

The touchdown was reviewed because it appeared Marshall had dropped the ball before crossing the goal line, but replay upheld the score.

Oregon’s Danny Mattingly muscled the ball away from a Buckeyes’ receiver to pick off a Jones pass the play before at the Ducks’ 30. It was Ohio State’s 3rd turnover of the game. Jones had just converted a 4th and 1 with a run.

After cutting the Ohio State lead to 4 points, Arik Armstead recovered a Jones fumble, the Buckeyes’ 4th turnover of the game and second in as many possessions to begin the 2nd half.

Elliott scored on a 9-yard run on the last play of the 3rd quarter to put Ohio State up 28-20.

Oregon had cut the lead to 1 point, but Ohio State responded with a 12-play, 75-yard drive.

Elliott had 6 carries for 44 yards. The TD run put him at 203 yards, his 3rd-straight game hitting that mark.

Jones connected with Marshall on a 3rd and 5 to keep the 76-yard drive alive. Jones also hit Michael Johnson for 23 yards.

Mariota was taken to the turf hard by Ohio State’s All-America defensive end Joey Bosa midway through the 4th quarter. The Heisman winning quarterback had his right shoulder driven into the ground and had to leave the game for a play.

Backup QB Jeff Lockie came in and threw an incompletion. Mariota returned to complete a 19-yard pass to Dwayne Stanford before the Ducks had to punt.

Oregon got the ball back with 4:17 left but turned the ball over on downs at its own 14-yard line.

Elliott’s 4th touchdown run – from 1-yard out – gave Ohio State a 42-20 lead with a under a minute left, clinching the national championship in the first-ever College Football Playoff.

Urban Meyer has been down this road before.

Meyer won 2 Bowl Championship Series titles as the coach of Florida after the 2006 and ’08 seasons. Meyer actually beat his current employer in the 2007 BCS title game.

Monday night, Meyer is hoping for title No. 3 as his Ohio State Buckeyes (13-1) take on Oregon (13-1) in the inaugural CFP Championship Game.

Across the field will be Mark Helfrich, who in just 2 seasons at the helm of Oregon has compiled a 24-3 record. With Heisman winner Marcus Mariota, the Ducks are the 2nd-highest scoring team in the nation at 47.2 points per game.

Oregon played in the 2011 BCS title game, falling to Auburn 22-19. Ohio State has claimed 8 national championships, most recently the 2002 BCS title with a 31-24 win over Miami. The Buckeyes lost back-to-back BCS championship game after the 2006 (to Florida) and ’07 (to LSU) seasons.