Prior to the first Super Bowl, the season ended with an AFL Champion and an NFL Champion. And why would they need anything else? The AFL was made up of players rejected by the NFL because they weren’t good enough. No league could ever compare to the talent in the NFL.

The AFL owners then took it upon themselves to change this. They signed the players rejected by the NFL, and many of them turned out to be very talented. Eventually, the two leagues were in bidding wars over top free agents and highly-rated draft picks.

After the NFL realized the AFL wasn’t going away, they started negotiations. On June 9, 1966, the two sides signed a merger agreement. The agreement created a common draft and the AFL-NFL World Championship Game, and said the two leagues would merge into one prior to the 1969 season.

Here’s what you need to know about the Super Bowl that started it all:

Starr won MVP after going 16 for 23 for 250 yards, two touchdowns and an interception. Both of his touchdown passes were to Max McGee. Packers’ running back Elijah Pitts ran for two touchdowns, and Jim Taylor added another.

Chiefs quarterback Len Dawson went 16 for 27 for 211 yards, a touchdown and an interception. The touchdown was scored by Curtis McClinton.

The game, which was broadcast on NBC and CBS, had a total of 51.18 million viewers. 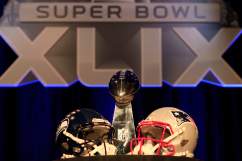 Super Bowl Winners Through the Years

Read More
NFL, NFL playoffs, Super Bowl
The first Super Bowl was played 48 years ago. It's likely you've forgotten some facts here and there, so here's a refresher.