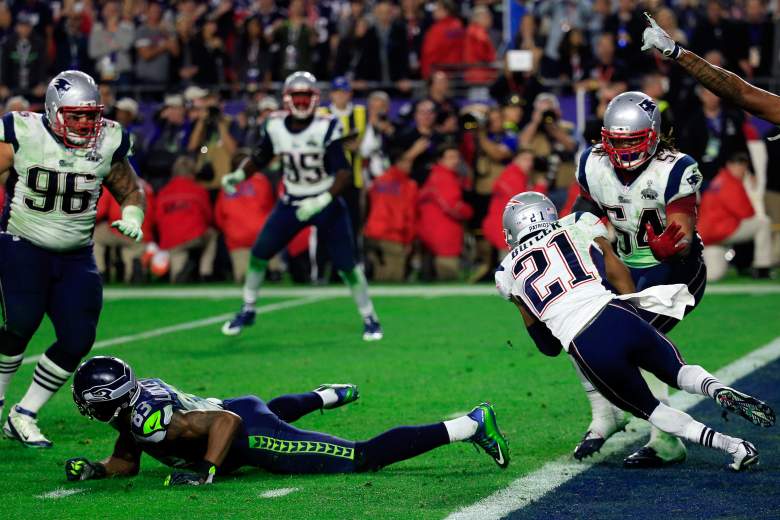 Malcolm Butler intercepts Russell Wilson’s pass on the goal line in the fourth quarter of Super Bowl XLIX, giving the Patriots a miraculous win for their fourth title. (Getty)

In 2013, Malcolm Butler was playing in the Gulf South Conference. He may have been a college All-American, sure. But he was a Division II All-American from the little-known University of West Alabama.

Butler was lightly regarded by pro scouts and went undrafted last spring. In a New England Patriots secondary headlined by All-Pro Darrelle Revis and featuring high profile performers like Brandon Browner and Devin McCourty, he was hardly recognizable to most fans.

Yet on Sunday night in Arizona, with the world watching and Super Bowl XLIX hanging in the balance, Butler solidified his place in New England sports lore, when his goal-line interception of Russell Wilson in the final seconds gave the Patriots a riveting, improbable 28-24 win and their fourth Lombardi Trophy.

There are a handful of New England athletes who, as the cliche goes, will never have to buy a drink in a Boston bar for the rest of their lives because of their postseason heroics. Dave Roberts, whose stolen base in Game 4 of the 2004 ALCS against the Yankees paved the way for the Red Sox to end the Curse of the Bambino, had been the poster child for that group.

With one play Sunday night, Butler joined the club in the most emphatic way possible.

The play, though, wasn’t just celebrated throughout New England. It was also celebrated in Livingston, Alabama, where the university was quick to point out its connection to its most famous alumnus.

The West Alabama sports information staff was quick to publish a story on Butler’s big play. From the school’s website:

Tom Brady took home the MVP, but it was former West Alabama All-American Malcolm Butler who made the play that clinched the New England Patriots win in Super Bowl XLIX.

The undrafted free agent from UWA intercepted Seattle quarterback Russell Wilson with 20 seconds left to seal the deal for the Patriots. And the rest is history.

One ESPN reporter even went as far as to say that Butler will never have to buy a drink or pay for another meal in New England for the rest of his life.

“Or in Livingston for that matter,” quipped UWA head coach Brett Gilliland.

They’re also celebrating Malcolm’s heroics in his home town of Vicksburg, Mississippi, where he was one of the state’s best defensive backs before moving on to West Alabama.

Butler made a trip back to Vicksburg in November and fired up the crowd at a pep rally before the football team’s last game of the season. Watch his appearance, along with some highlights from his West Alabama days, here: