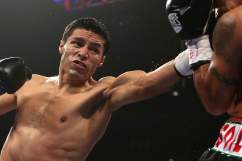 Kell Brook enters the fight a heavy favorite, but Jo Jo Dan is a live dog coming off five consecutive wins and has no plans to roll over for the undefeated Sheffield man.

Brook (33-0, 22 KOs), one of the sport’s rising stars, was last in action with a victory over then-undefeated Shawn Porter in August of 2014. Prior to the Porter fight, 28-year-old Brook had dispatched Alvaro Robles and before that had stopped Vyacheslav Senchenko in four rounds.

Ionut Dan Ion (34-2, 28 KOs) enters the ring having squeaked by in a rematch against Kevin Bizier with a split decision in December of last year. Previous to that, southpaw Ion, 33 years old, had stopped Lukasz Janik after outpointing Kevin Bizier in their first encounter.

PADDYPOWER offers bets on the manner of winning:

The Brook-Dan fight will be rebroadcast on Showtime later that night after the Gonzalez-Russell Jr. bout, which starts at 10PM ET.