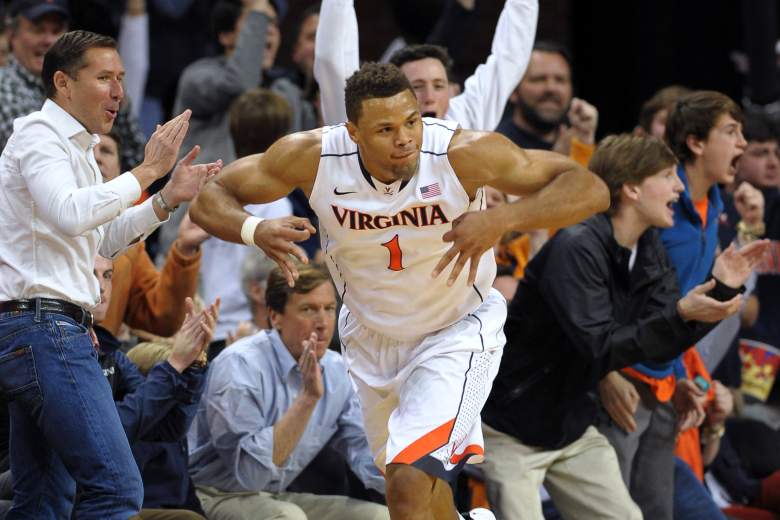 Virginia’s Justin Anderson reacts after hitting a shot in a game earlier this season against Duke. (Getty)

For the first time since 2004, a Region’s No. 1 and 2 seeds failed to reach the Regionals.

If Michigan St. holds on, this would be the first region with both the 1 and 2 seed missing the Sweet 16 since 2004

Magic Johnson is in the building to support his Michigan State Spartans #MarchMadness pic.twitter.com/bjMGPTi4ws

Spartans guard Travis Trice was the difference in the game. Trice went 7-for-15 with 23 points and was able to provide production from the backcourt that Virginia couldn’t match.

Virginia had trouble scoring all season and since Jusatin Anderson’s injury, had even more problems scoring in game’s down the stretch. Virginia lost three of their final five games and had an early exit from the NCAA Tournament.

Michigan State plays the winner of No. 11 Dayton vs. No. 3 Oklahoma in the Sweet 16 from Syracuse next weekend.

Click here for the game’s full box score and a continued recap.

Virginia has the third-best field goal percentage defense in the nation (36.5%). Michigan State is 6-8 (75%) out of the gate

– Virginia’s defensive efficiency evaporated in the game’s first eight minutes. Tom Izzo’s Spartans presented the toughest test for the Cavaliers and they made 6-for-8 of their field goal attempts early to take a 15-4 lead.

For the second time in three days, Virginia struggled on the offensive end right out of the gate.

– Darion Atkins was a major reason why Virginia didn’t let the game continue to get away from them on the 1st half.

– At halftime, Spartans guard Travis Trice led the game in scoring with 13 points on 5-for-8 shooting from the floor. He was the only player in double figures.

– The combined 23-17 halftime score was the lowest of the Tournament.

Branden Dawson has scored seven straight points to give the Spartans a 34-25 lead with 16:05 remaining. Virginia calls timeout.

Virginia's last 9 points have come from the free throw line but the Cavaliers haven't hit a FG in almost 8 minutes (12:21 mark)

– Virginia’s offense went cold during a large stretch of the 2nd half. In addition to not making field goals, they’re shooting a mediocre 70% from the FT line.

They were also TERRIBLE from beyond the arc.

Travis Trice may have hit the biggest shot in the entire Tournament for Michigan State.

Virginia, the East’s No. 2 seed, is now the highest seed remaining after No. 1 seed Villanova was upset by North Carolina State on Saturday night. The Cavaliers are looking to reach their second consecutive Sweet 16.

To do that, they have to get through a familiar opponent: the Michigan State Spartans — the team that also knocked out Virginia in last year’s Sweet 16.

In the Cavaliers opening game, Belmont gave them a scare; the biggest scare any of the No. 2 seeds got. Virginia only led Belmont by eight at halftime, but Virginia’s efficient defense tightened up and the offense came around and eventually pulled away for a 12-point win. Michigan State didn’t exactly handle their first opponent well, either. Georgia held a 1st-half lead, relinquished their lead during the 2nd half, but eventually made one last effort that came up short.

The Spartans seven-point victory was a microcosm of their season — one of unpredictable potential. 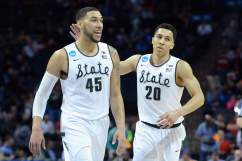