The 141st running of the Kentucky Derby will take place on Saturday, May 2nd 2015 at Churchill Downs Racetrack in Louisville, Kentucky.

For the third consecutive year, a tiered point system in select races will determine who qualifies to America’s greatest race. Each year 20 horses have the once in a lifetime chance to run in the Kentucky Derby. To earn a spot in the starting gate, they must travel along the Road to the Kentucky Derby, a series of 35 designated races at tracks across the country and around the world. Points are awarded to the top four finishers in each race. The 20 horses with the most points will earn a spot in the starting gate on the first Saturday in May.

Once the 20-horse field is set, it is not changed. Should one of the 20 horses in the field be scratched (removed) from the race, another horse does not take that spot. Hoppertunity — trained by Bob Baffert — was scratched from the 2014 Kentucky Derby with a foot problem.

At the beginning of each year, owners are given an a deadline to enter their 3-year old thoroughbreds into the Triple Crown qualifying process. This year’s early deadline was January 18th. There is also a late-nomination deadline, which is usually held towards the end of March, just as the Stakes races in the latter portion of the Road to the Kentucky Derby are coming to a close. This year’s late deadline was March 23rd. 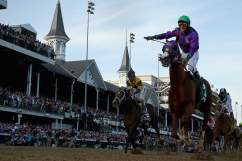