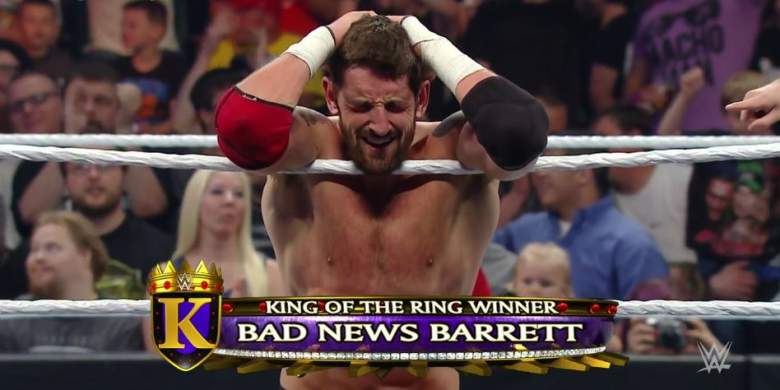 Tonight on the WWE Network the 2015 King of the Ring winner was crowned. After each advanced to the Final, Bad News Barrett defeated recent NXT call-up, rookie Neville with a Bullhammer to win the WWE’s first King of the Ring Tournament since 2010.

The original plans for the return of the King of the Ring was to have the entire tournament contested last night.

In the first match of the night, Barrett easily took care of R-Truth to advance to the Finals. Sheamus vs. Neille was next. Sheamus and Neville had a longer match than Truth and Barrett did. Sheamus looked to have Neville defeated a few times, but Neville continuously kicked out of Sheamus’ trademark moves. Like last night, Ziggler came out to confront Sheamus and this time ended up costing Sheamus the match, thus continuing the feud between the two superstars into next month’s Payback pay-per-view.

Where does this leave Barrett? Barrett was set to have a match with Daniel Bryan for the Intercontinetnal Championship at Extreme Rules that was put off because of Bryan’s neck injury, which will cost him up to two months.

For both superstars, this continue’s the feud’s momentum even with Bryan hurt. King Barrett will reign on Raw and Smackdown until Bryan makes his triumphant return to have the match that the WWE Universe is anticipating from both members of the NXT’s first graduating class of 2010.