For the first time since 2000 (Colorado vs. Dallas and New Jersey vs. Philadelphia), each NHL Conference Finals are going to be decided with a Game 7; that makes 15 years.

The National Hockey League officially released its schedule for the 2015 Stanley Cup Final. According to NHL.com writer E.J. Hradek:

The Final will start on Wednesday, January 3rd. Each game of the Stanley Cup Final starts at 8 p.m. ET in prime time on NBC or the NBC Sports Network. The only game with an earlier scheduled start time is Saturday night’s Game 2 (on NBC), which has a 7 p.m. ET start time — this is due to NBC following up next Saturday’s coverage of the 2015 Belmont Stakes and leading that directly into Game 2 of the Cup Final to try and maintain a high viewership for each.

Here is the full schedule:

* – indicates if necessary
** – indicates that although there has been no formal announcement, NBC will likely be the channel for the game

The NBC is contractually obligated to show two games of the Stanley Cup Final on the NBC Sports Network. Those games will most likely be Games 3 and 4 like they were for last year’s Final between the Los Angeles Kings and New York Rangers. 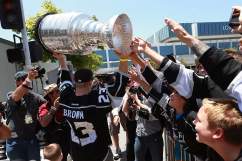 Read More
Breaking News, Hockey, NHL
Here are the dates and times for the 2015 Stanley Cup Final, which is set to begin next Wednesday, June 3rd.