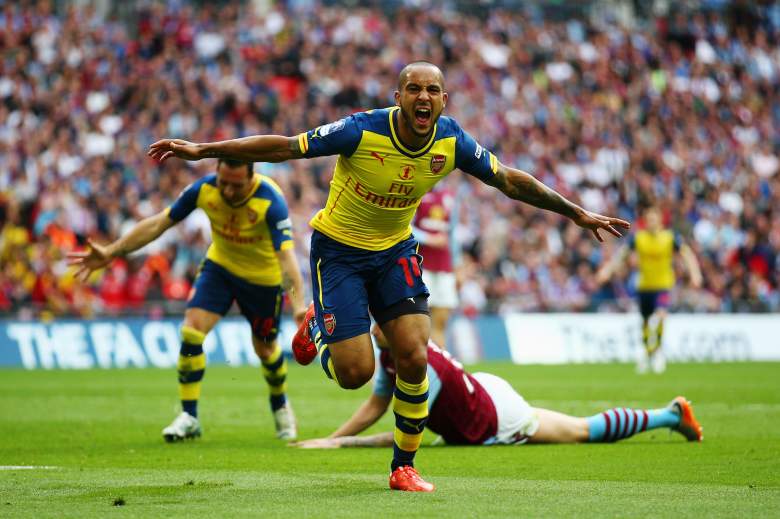 Arsenal put on an utterly dominant display in front of 89,283 spectators inside Wembley Stadium this Saturday, as the beat a shell-shocked Aston Villa 4-0 in the FA Cup Final. They’re now the competition’s most successful team, having lifted the trophy on 12 occasions.

Arsenal dominated the opening minutes, enjoying considerably more possession and creating the most dangerous chances. Theo Walcott – something of a selection gamble by Arsene Wenger following an injury-hit season – was a threat throughout the first half, and it was the England international who opened the scoring in the 40th minute, lashing home Alexis Sanchez’s knock-down with his left boot.

The Chilean then made the score 2-0 shortly after halftime, and the game was dead as a contest. The run of Nacho Monreal down the left flank bought Sanchez a split-second of space, and he hit a 25-yard snorter that dipped and swerved past the hapless Shay Given.

Tim Sherwood sent on Gabriel Agbonlahor and did his best to gee up a flailing Aston Villa, but Arsenal always looked capable of soaking up the pressure, and were continually dangerous on the counter-attack. In the end, it was the surprising figure of Per Mertesacker who sank the final nail into Villa’s coffin. Losing Christian Benteke in the box, the giant German shouldered the ball into the far corner from the cross.

The last act of the game fell to substitute Olivier Giroud. The Frenchman beat the Villa offside trap to flick Alex Oxlade-Chamberlain’s cross past Shay Given to rub salt in Birmingham wounds in the 94th minute. Villa didn’t muster a single shot on goal during the game.

It’s back-to-back FA Cup victories for Arsene Wenger, and six in total for his career. Can Arsenal build on this victory and deliver a real Premier League title challenge next season? Maybe, but we’ve heard that one before.

Scroll down for video highlights of all the goals from the 2015 FA Cup Final.

15th Minute: Stunning Save From Given

Shay Given pulls out a stunning save, diving to his right to deflect Laurent Koscleiny’s header.

Theo Walcott latched onto an Alexis Sanchez knock-down to smash the ball home with his weaker left boot. Monreal provided the cross from the left hand side for Sanchez’s assist.

It was coming for Arsenal; they dominated possession and Walcott’s pace had looked especially dangerous.

Alexis Sanchez hits a certified thunder-b*astard with his right foot from 25 yards out to make it 2-0 to Arsenal. Nacho Monreal’s run created a flicker of space for the Chilean, and he duly belted it past Shay Given in the Villa goal. It swerved and dipped to evade Given’s attempted save, smashing the back of the net via the underside of the crossbar.

It was Sanchez’s fifth goal at Wembley in just three appearances.

Arsenal’s giant German defender Per Mertesacker put this game out of sight. The German international easily evaded the attentions of Christian Benteke in the box to “shoulder” the ball into the far corner.

Frenchman Olivier Giroud came of the bench to rub salt in Aston Villa’s wounds. The striker evaded the Villa offside trap to flick Alex Oxlade-Chamberlain’s cross past Shay Given. 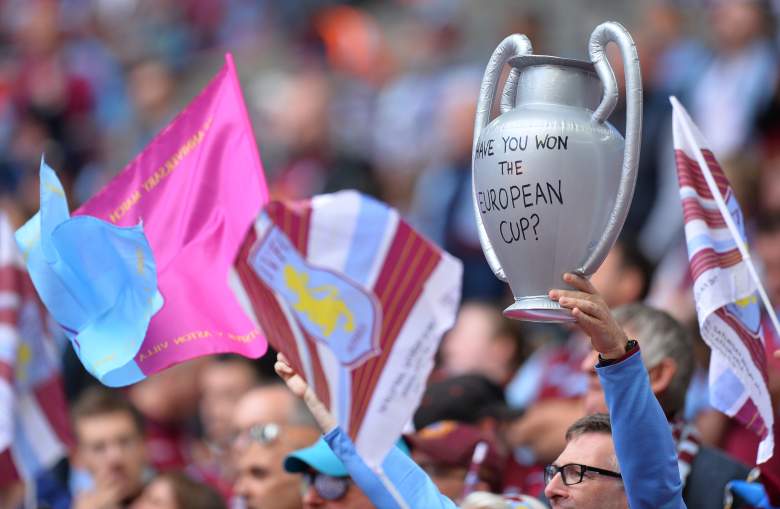 Villa fans warm up for the final (Getty)

Defending champions Arsenal take on Aston Villa today in the 2015 FA Cup Final. 736 teams entered the competition all the way back in August, and now just two remain. Should Arsenal lift the trophy, they’ll be the most successful team in FA Cup history, winning football’s oldest club competition for a record 12th time. For Aston Villa, victory this weekend will bring them their first trophy in 19 years.

While Arsenal are the bookies’ clear favorites, they have, arguably, had the worse preparation: The Gunners were battling for automatic Champions League qualification right until the final game of the season, while Villa have had their feet up ever since they ensured Premier League survival with three games to spare. With the exception of Danny Welbeck, however, Arsene Wenger has a fully fit squad.

And spare a thought for Prince William this weekend. The Duke of Cambridge is an avid Aston Villa supporter and, in his role as President of the FA, is responsible for presenting the Cup to the winning captain. If Arsenal prevail, that could be a tough ask, not least because his brother – Prince Harry – is a Gunner.

Keep it here for rolling highlights, stats and the latest score from the game as soon as Jon Moss blows his whistle for kick-off at 5:30pm BST.

Read More
Soccer, Sports
Highlights, stats and videos of all the goals from Arsenal's 4-0 victory over Aston Villa in the FA Cup Final.