Mayweather Jr. is lead away in handcuffs at the Clark County Regional Justice Center as he surrenders to serve a three-month jail sentence in 2012. (Getty)

One of today’s most decorated and well-known professional athletes, Floyd Mayweather Jr., is also one of the most challenging to admire. For many, his numerous run-ins with the law and his reputation as a misogynist have overshadowed his accomplishments in the ring.

There have been five documented instances of violence, with one leading to time in prison.

1. 2002- Two Counts of Domestic Violence &  One Count Of Misdemeanor Battery

After getting into an argument with his daughter’s mother, Melissia Brim, in 2001 and punching her repeatedly in the face, Mayweather entered a plea bargain and received a six-month suspended sentence, two days of house arrest, and he was ordered to perform 48 hours of community service.

Mayweather got off with a suspended sentence of one-year in jail, ordered to undergo counseling, and a $1000 fine after being  found guilty of battery for punching two friends of Josie Harris, mother of Mayweather’s three other children.

“You may be a terrific and famous fighter, but that doesn’t make you a god,” Justice of the Peace Deborah Lippis told Mayweather during the trial. 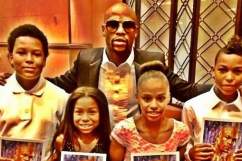 In this handout provided by the Las Vegas Police Department, boxer Floyd Mayweather Jr. poses for a mug shot in Las Vegas, Nevada.

Mayweather pleaded no contest and earned himself a misdemeanor battery charge after beating a bouncer in Grand Rapids, Michigan bar.  Pretty Boy Floyd received a 90-day suspended jail sentence for that one.

Also in 2005, Mayweather was charged with felony battery after he was accused of beating ex Josie Harris. During the trial, Harris recanted her previous statements, and the charges were dropped.

In 2011 Mayweather was sentenced to time in a correctional facility after attacking his ex-girlfriend Josie Harris in front of their children.

Although the charges of felony robbery, coercion, and grand larceny were eventually dropped, Mayweather plead guilty to a reduced battery domestic violence charge and no contest to two charges of harassment.

He was sentenced to a 90 day stay, had to complete 100 hours of community service, a 12-month domestic-violence program, and to was order to pay a $2,500 fine. He only served 60 days before being released.