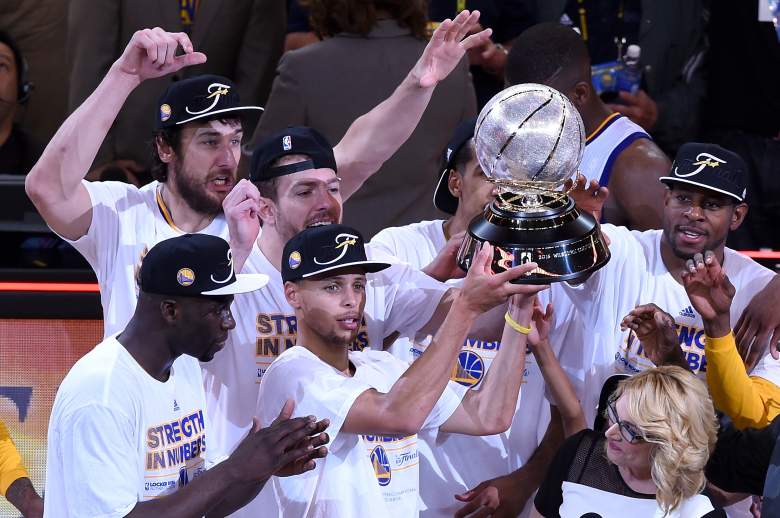 The Golden State Warriors are in their first NBA Finals since the 1974-75 season. (Getty)

Apparently the Golden State Warriors and Cleveland Cavaliers are ready to roll.

With Golden State’s 104-90 win over the Houston Rockets on Wednesday night in the Western Conference Championship series, the top-seeded Warriors needed just 5 games to clinch a spot in the NBA Finals. The evening before, the No. 2 Cleveland Cavaliers finished a 4-game sweep of the No. 1 Atlanta Hawks in the East.

So in what should be a very entertaining NBA Finals, the Cavaliers and Warriors meet for the Larry O’Brien Championship Trophy.

Game 1 is set for Thursday, June 4, at Golden State’s Oracle Arena. Tip time is scheduled for 9 p.m. Eastern and the action can be seen on ABC. All games will be televised by ABC.

The Warriors also host Game 2 on Sunday, June 7. The series then shifts to Cleveland for 2 games, the first on Tuesday, June 9.

Golden State is in the Finals for the first time since 1974-75, when it swept the Washington Bullets for the NBA title. Cleveland is making its second trip the championship series. The first and only time came after the 2006-07 season, but LeBron James and Co. were swept by the San Antonio Spurs.

Editor’s note: Heavy’s partners at DraftKings are transforming fantasy sports with one-day contests designed to make you quick – and big – money. Head over to DraftKings.com, sign up and start winning cash today from MLB, NHL, PGA, NASCAR, NBA, MMA and soccer fantasy games. As a first-time user, when prompted, use promo code “Heavy.”