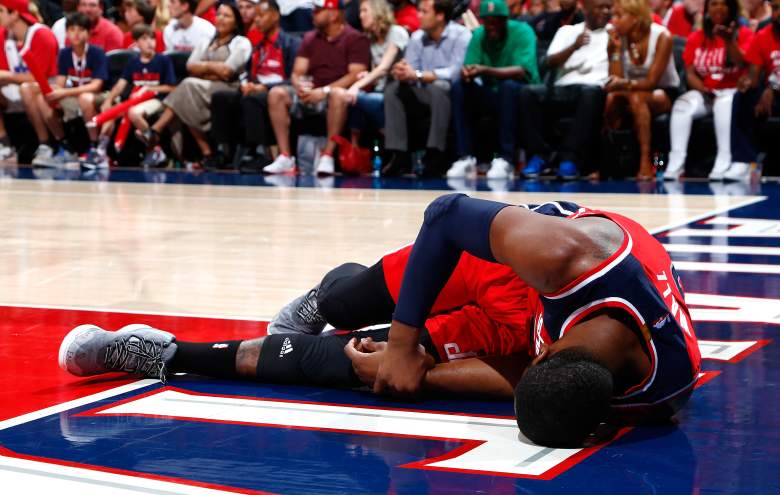 John Wall of the Wizards grabs his hand in pain after breaking it in Game 1 vs. the Hawks. (Getty)

If Game 2 was any indication of life will be like without John Wall, then the Washington Wizards are in trouble.

Days after taking a 1-0 series lead on the road against the top-seeded Atlanta Hawks, the Wizards were blown out 106-90 in Game 2, a contest played without their All-Star point guard who has a broken hand.

Despite the injury, Wall is questionable for Saturday’s Game 3 in Washington. The Wizards are no doubt hoping he can play.

Wizards are 10-40 during John Wall's 5-year career when he misses a game (including Game 2 vs. Hawks)

Tip time is scheduled for 5 p.m. Eastern and the game will be televised by ESPN. Mike Breen (play-by-play) will be joined by analysts Mark Jackson and Jeff Van Gundy on the call.

Times are Eastern – *if necessary

Editors note: Sign up for DraftKings’ NBA $100K Sharpshooter contest, which begins Saturday, May 9, at 5 p.m. Eastern. The contest is FREE for first-time DraftKings users and $3 for current members. First prize is $10,000 and 7,850 entered teams get paid. Fill an 8-player lineup with a $50,000 salary cap and if your selections do well on the court, your fantasy team will also. The Sharpshooter runs every night there are at least 2 games on the schedule, so if you miss Saturday’s deadline, you can sign up for Sunday’s contest.

Best of Phantom: Atlanta Hawks 2014-2015 Season HighlightsRelive a special season from the Atlanta Hawks in super slow-motion. About the NBA: The NBA is the premier professional basketball league in the United States and Canada. The league is truly global, with games and programming in 215 countries and territories in 47 languages, as well as NBA rosters at the start of the…2015-05-07T13:00:02Z

John Wall Growing Up in North CarolinaJohn Wall’s North Carolina roots shine through in his competitive edge. About the NBA: The NBA is the premier professional basketball league in the United States and Canada. The league is truly global, with games and programming in 215 countries and territories in 47 languages, as well as NBA rosters at the start of the…2015-05-07T21:20:01Z