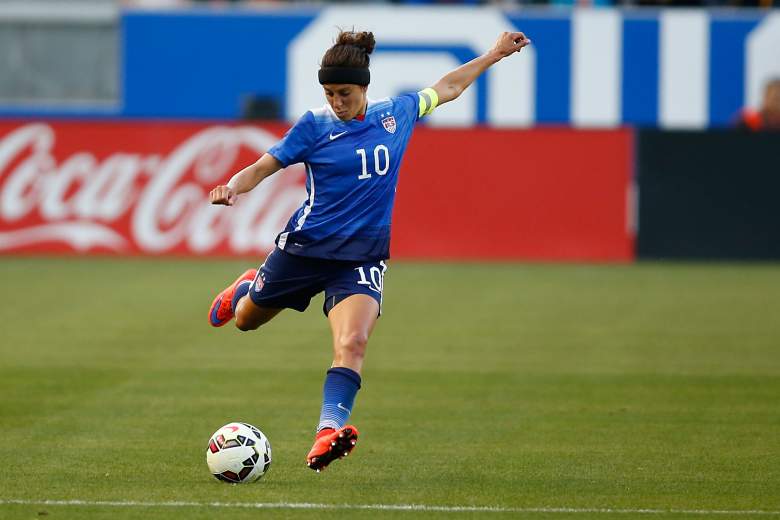 Carli Lloyd the United States are in Group D for the Women’s World Cup. (Getty)

The United States is considered the favorite for the 2015 Women’s World Cup, which gets underway on Saturday, June 6, from Canada.

But Team America is also part of the “Group of Death,” as 3 of the teams are ranked in the world’s top 10. The U.S., entering the tournament with 9/4 odds, is in Group D with Sweden, Australia and Nigeria. America is ranked 2nd in FIFA, while Sweden is 5th and Australia 10th. Nigeria is 33rd.

The quarterfinals are June 26-27, the semis June 30-July 1 and the Final is scheduled for Sunday, July 5, from BC Place Stadium in Vancouver.

Keep reading to see all the participating teams and complete match schedule, with dates and times:

Editor’s note: Heavy’s partners at DraftKings are hosting soccer fantasy contests for the MLS, EPL UEFA Champions League throughout the week. It’s only $3 to play, so sign up and play today for a chance at thousands in cash prizes.

All times are Eastern

7 p.m.: Cameroon vs. Ecuador at BC Place, Vancouver

10 p.m.: Japan vs. Switzerland at BC Place, Vancouver

7 p.m.: Switzerland vs. Ecuador at BC Place, Vancouver

10 p.m.: Japan vs. Cameroon at BC Place, Vancouver

8 p.m.: Nigeria vs. United States at BC Place, Vancouver

From here on, team designations refer to place in the group standings. Example: 1C is the 1st-place finisher in Group C, not team C1 in the Group Stage.