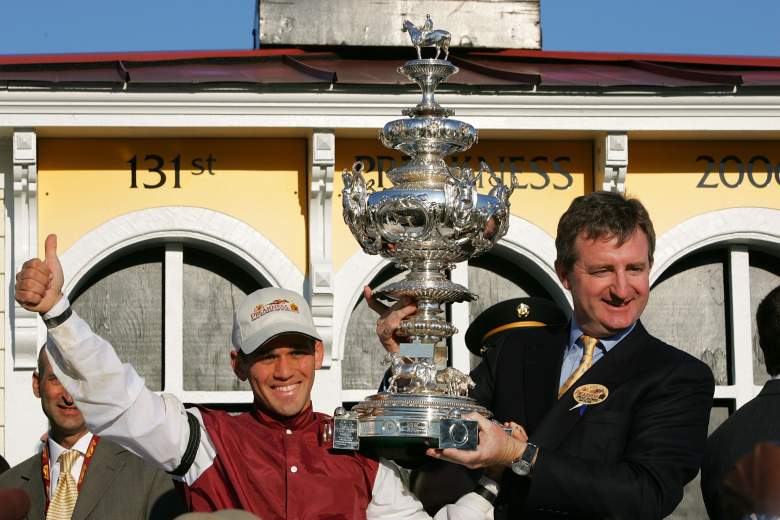 Bernardini jockey Javier Castellano (L) and a representative from Darley Stabes hoist the Woodlawn Vase in the winner’s circle following the 131st Running of the Preakness Stakes on May 20, 2006 at Pimlico Raceway in Baltimore, Maryland. (Photo by Jamie Squire/Getty Images)

The Preakness Stakes is the 2nd jewel of horse racing’s Triple Crown, but what is the trophy that is awarded to the winner?

The answer is: for a time, the Woodlawn Vase… The trophy was created by the well-known Tiffany & Co, and also has a rich, storied history that dates back to 1861, but didn’t officially become the trophy awarded to the Preakness winner until 1917.

However, that changed in 1953 and a new tradition was created:

That all changed when A. G. Vanderbilt’s Native Dancer won it but his wife did not want to take on the immense responsibility of the vase’s safekeeping. Now the winning owner is awarded a $30,000 sterling replica on a permanent basis while the perpetual is on display at The Baltimore Museum of Art and brought to Pimlico under guard for the annual running of the Preakness.

The winner of the 140th Preakness Stakes was American Pharoah who will move on to compete in the Belmont Stakes three weeks from now with an opportunity to win horse racing’s illustrious Triple Crown.

Read More
Breaking News, Horse Racing, Preakness
The Preakness Stakes is the second leg of horse racing's Triple Crown, but what is the trophy that is awarded to the winner?