The wait is over. Byron Buxton is on his way to the Minnesota Twins.

Buxton, an electrifying talent and top overall prospect, will join the Twins Sunday against the Texas Rangers, and among his support system will be his fiancee, Lindsey Tillery, and his young son, Brix.

Here’s everything you need to know about the young star and his family.

1. Byron and Lindsey Went to High School Together but Never Met There

Both attended Appling County High School in Baxley, Georgia. Buxton was a freakishly gifted three-sport star who was hitting over .500, had an ERA under 2.00 and could reportedly throw a football over 80 yards. Lindsey, who was three years older, was a softball star.

“I had heard about him but I never met him,” she said. “I played softball, and my father knew all about Byron. We walked the same halls every day but never spoke.”

They eventually met through a mutual friend after both had graduated from high school. 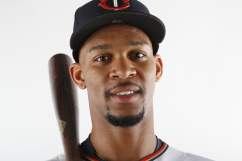 Lindsey does anything and everything to help Buxton on his road to stardom. She conducts fake interviews, offers criticism and makes sure he continues to work hard.

“She’s just always telling me good things,” he said. “When I don’t want to work out, she’ll be the one to tell me, ‘You’re going to work out.’ She just keeps me straight most of the time.”

On December 6, Lindsey gave birth to Brix Scott Buxton. Fatherhood has helped the 21-year-old Buxton grow up an exponential rate.

“It just makes you appreciate more things in life,” he said. “Now you’ve got to take care of somebody that’s yours. So far, it’s been pretty amazing.”

Instead of partying like many kids his age, Buxton, who received a $6 million signing bonus when he joined the Twins, spends most of his days at home with his family.

“I ain’t up for that party life,” he said. “I pretty much stay in the house all day. Yesterday, me and Brix slept most of the afternoon.”

4. She Was a Nursing Student

Lindsey attended nursing school at Valdosta State University in Valdosta, Georgia, although it’s unclear if she is still enrolled there. Her last tweet about nursing school was May of 2013, so it appears that motherhood may be priority No. 1.

In September 2014, Tillery announced that she and Buxton were engaged:

Started with an adventurous scavenger hunt and ended with a ring and one knee.. I said YES to spending forever with my best friend! I am so blessed to have this dream become a reality and I couldn’t be happier!